The One-Page RPG Jam 2020 was announced last week and started on the 27th of July. I decided to take part, as I like trying out different things and expanding my skill set, and I really needed a short break from my other projects anyway. I submitted my game last night, and you can grab it free from here:
Download: https://zadmar.itch.io/the-fools-who-follow 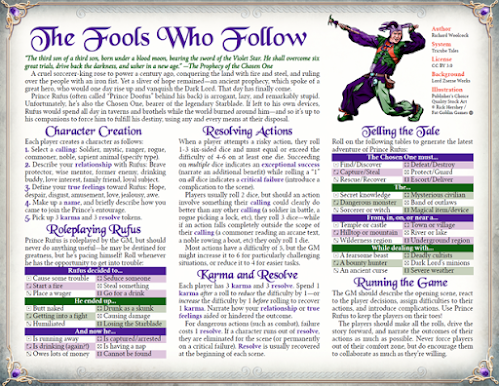 Concept
The Chosen One is a classic trope, but it doesn't work very well for most tabletop roleplaying games, as you don't usually want one player hogging the limelight. I've seen some fun ideas for subverting it, though, such as the Chosen One unexpectedly dying and the PCs having to pick up the slack (the very NSFW Oglaf webcomic also did something similar, with the Chosen One being killed by a shopkeeper for "stealing" the weapon he was prophesied to wield).
I originally considered doing something similar, with the Chosen One being killed (perhaps even at the hand of the PCs) prior to the adventure, but I eventually decided it would be more interesting if I turned the Chosen One into a liability, an ongoing problem the players would have to deal with as part of the story. That also meant I could revisit the shenanigans rules I first used in Saga of the Goblin Horde, and see how well they could be adapted to other settings!
Structure
A single page doesn't give you much space to work with, but I had a look at a few other one-page RPGs for inspiration, and eventually settled on four sections: Scenario overview, characters, game rules, and running adventures. Back when I worked on The Goblin Warrens, I combined a 200-word RPG with a 200-word adventure, and that was the benchmark I decided to use here. Likewise, creating a scenario overview was pretty similar to the various adventure seeds I wrote for Saga of the Goblin Horde and Blood & Bile.
Rules
I decided to base the system on Tricube Tales because I already knew it worked, plus it provided me with a cross-promotional opportunity. I had to streamline the rules significantly, and even dropped traits -- but I chose to keep karma, as I consider it an essential part of the system (it gives players a degree of control over the outcome of their rolls, rather than leaving everything to chance).
Layout
I've been meaning to try my hand at a landscape PDF for a while, and this seemed the perfect opportunity. Four columns would have been too squashed up, however, so I placed the scenario overview at the top of the page and split the rest into three columns. I also had a look at the layout of other one-page RPGs -- in particular, I drew inspiration from the way Lasers & Feelings designed its tables (although I kept the dice icons I'd used for tables in my earlier products).
Color-scheme
For the initial trade dress, I picked a page background I liked from Lord Zsezse Works and found a suitable jester illustration from Fat Goblin Games. I adjusted the colors of the jester slightly to better match the purple corners of the page background, then realized the illustration's three main colors (purple, green and orange) followed a triadic color scheme on the color wheel, so I decided to use it for the text and tables as well.
Summary
It took me a couple of days to transform The Fool Who Follows from a rough idea into a polished product, and I'm pleased with the way it turned out. One-page RPGs are fun to design, I can see them being a great way to try out different ideas (much like I've suggested using One Sheets to try out ideas for Savage Worlds settings). It also allowed me to experiment with different styles of layout and trade dress.
I've been meaning to establish a presence on itch.io for a while, so it's nice to finally have something on there, even if it's just a tiny one-page game. Will I create some more? I've not decided yet. Would you like me to? Let me know!
Posted by Richard Woolcock at 05:15