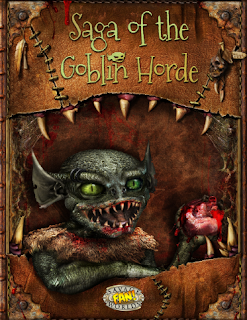 I started working on Saga of the Goblin Horde back in December 2015, and I've released a lot of content for it since then, but now I've finally finished the full setting book! So without further ado...

Saga of the Goblin Horde

The book contains the same information as the player's guide (introduction to the setting, 5 new races, 41 Edges, 20 Hindrances, weapons and armor, setting rules, deities, gazetteer, and map), but also includes the Game Master's section (setting secrets, a plot point campaign, a load of adventure seeds, an adventure generator, and a large bestiary).

Don't forget to grab all the other stuff for it, like the archetypes, One Sheets, etc. You can get them all here.

Posted by Richard Woolcock at 14:53 No comments:

A lot of people seem to have difficulty wrapping their heads around the chase rules in Savage Worlds, either because they find the rules confusing, or because they have trouble connecting the game mechanics to the narrative. In particular, many people seem to view chases as a "race", when what they more accurately represent is a mobile combat encounter, in which the characters are exchanging attacks while rushing across the landscape.

The way I usually explain chases is by asking people to imagine a typical action movie chase scene, and then pick out five pivotal moments from the scene to represent the rounds in which the characters take their actions. The remainder of the scene would just be handled through the narrative.

For example, imagine this scene from Casino Royale:

In the above chase scene, I would probably define the five rounds as follows:

Round 1 (takes place at 0:26): James Bond makes a Driving roll in the first round (Agility rolls after that, once he leaves the vehicle). He has the Advantage, and uses the Force maneuver against the bad guy, but fails.

Round 2 (takes place at 1:15): James Bond has the Advantage, but drew the King of Clubs, meaning he's distracted by the explosion.

Round 3 (takes place at 2:40): The bad guy has the Advantage, and makes a Shooting attack at short range, but rolls a critical failure (his gun jams). James responds with an Agility trick (he doesn't need the Advantage for a Trick), and causes the bad guy to become Shaken.

Round 4 (takes place at 3:00): The bad guy has the Advantage, and attacks James, causing him to become Shaken.

Round 5 (takes place at 5:05): The bad guy has the Advantage, and reaches the safety of the embassy.

Everything else would just be part of the narrative, described by the players and Game Master.

Some people understand how to narrate the chases, but find the rules overly complicated, and/or dislike the way characters cannot attack without Advantage. A suggestion I've made in the past is to streamline the chase rules by removing the attack range and complication tables - even I have to look those up, and to be honest, having to reference table entries every round isn't very FFF.

Each round, each character makes their maneuvering trait roll, drawing one card for each success and raise (as normal). The characters then take their actions in sequence, however:

So face cards would allow melee attacks, while spot card would require ranged attacks, and you'd have a penalty of between +0 and -4, which the Game Master or players could narrate as range, cover, distractions, etc.

Note: Savageblog Italia have translated this post to Italian, read it here.
Posted by Richard Woolcock at 07:54 No comments:

When designing my Swift d12 system, I wanted to keep the rules streamlined, so I decided to introduce a simple mechanic for handling Flaws. The approach I used was to make them primarily descriptive, and allow players to "invoke" each Flaw once per session in return for Karma Points.

It struck me that the same approach would also work rather well for Hindrances in Savage Worlds, so I came up with a quick conversion:

Players can invoke each of their Hindrances once per session. This must be done before making a trait roll, and the player should explain how their Hindrance gives them a disadvantage in this particular situation. If the GM accepts the explanation, the player earns a Benny, but also suffers a –2 penalty to their roll, and must draw a card. If the card is Clubs, there is a further complication; the penalty increases to –4, and failure is treated as if it were a critical failure.

Players cannot spend a Benny to reroll an invoked Hindrance.

The Game Master tells everyone to make Notice rolls as they approach the cave. Lexi invokes her Overconfident Hindrance; she's not scared of some smelly old cave, so she'll just go marching straight in without bothering to look for signs of danger! She draws the Five of Hearts, and makes her Notice roll with a –2 penalty, but Aces her roll and succeeds anyway.

Rylan disturbs a dragon while exploring its lair. The Game Master decides that this scene will be resolved as a Chase, and asks for a maneuvering trait roll. Rylan invokes his Greedy Hindrance in the first round, and announces that he's been distracted by the dragon's treasure hoard. He draws the Seven of Spades and makes his Agility roll with a –2 penalty, failing the roll. Looks like he's going to need that bonus Benny for a Soak roll!

Big Brak launches a furious attack against a human adventurer, and decides to invoke his One Eye Hindrance; the player describes how the human ducks around Big Brak's blind side, putting him at a disadvantage as he tries to swing his axe. He draws the Ace of Clubs and suffers a –4 penalty to his attack – failure! The GM declares that Big Brak loses his grip on his axe, and accidentally tosses it away into the river!

This rule obviously turns the "fluffy" Hindrances into more of a benefit than a drawback, but it works extremely well in Swift d12, where I've found it really encourages the players to add some interesting narrative to the game. I see no reason why the same solution wouldn't work just as well in Savage Worlds.

My older Hindrance Cards idea also gave players a more direct means of earning Bennies, helping to take some of the pressure off the GM, but it always felt a bit handwavy during play. By contrast, the "invoke" rule feels more like the players are paying a fair price for their bonus Benny.
Posted by Richard Woolcock at 16:05 No comments: 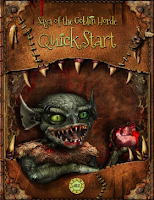 The Chase rules have been redesigned. They still work in roughly the same way, but should now be more intuitive.
Posted by Richard Woolcock at 13:06 No comments:

However if everyone rolled initiative in regular combat, it would add even more rolls, and the more I think about this issue, the more I feel that initiative is already overly intrusive. Savage Worlds manages to get away with calculating initiative every round, perhaps because the cards feel like such a different game mechanic to trait checks, but in Swift d12 the extra roll can become annoying.

The main design goal for the original initiative system was to ensure that one side didn't always get to act before the other (because there are often large numbers of combatants on the battlefield, and one side could cripple the other if they all got to attack first). Any alternative system would still need to address that original design goal.

One interesting initiative system I've read about is the one in Shadow of the Demon Lord, where characters can choose to take either a "fast turn" or a "slow turn". Players act before NPCs within each turn, and those in the fast turn take one action while those in the slow turn take two actions, so acting first comes at a price. This is a quick and clever mechanic, and feedback from players seems to be generally positive. While the solution wouldn't work as written in Swift d12, it's given me inspiration for something along similar lines.

However characters can only rush if they're not Staggered, and they become Staggered when they rush. Of course they can still use the recover action to immediately remove the Staggered condition as usual, but recovering is a simple action, so it'll cost them an action die.

Interaction with Other Mechanics

In a surprise situation, the surprised characters always start combat Staggered, and this would prevent them from rushing.

The All-Out Attack maneuver gives characters +2 to attack and damage, but they also become Staggered. What I wanted to avoid in the original initiative system was a situation whereby players could choose to act last with an All-Out Attack, then act first in the next round and recover before anyone could take advantage of them being Staggered. But as Staggered characters cannot rush, this wouldn't be an issue with the proposed rule.

Posted by Richard Woolcock at 09:07 No comments: