I've been doing quite a lot of playtesting for Swift d12 lately, and have been tweaking and refining the mechanics based on those playtests. Last week I mentioned the new rules for Complication Dice, but I've also made a few other significant changes.

Although I liked the old wound system on paper, in practice it proved a pain to calculate all the modifiers every time a Champion took a hit, particularly for characters with bonuses to Endurance and Vitality. So I went back to the drawing board and redesigned it.

I also ripped out the chase rules. It was painful to do so, as I'd put a lot of time into them, but I was never quite happy with the way they worked, and they didn't quite mesh with the rest of the rules - they felt bolted on. I've saved them in a separate file, perhaps I'll revisit them later, but for now they're gone. I've included simpler replacement chase rules as a type of extended ability check.

The defensive ability checks have also been removed, as they don't work quite so well with the revised action dice (opposed rolls are no longer symmetrical), and they raise some awkward questions about the use of Karma Points.

Other rules have been added, such as improvised weapons and unarmed attacks, specific action types, new Feats, revisions to derived traits, and so on.

There's still quite a lot to finalize, and a lot more polishing to do, but the system feels pretty robust now. You can grab the latest version of the rules from here, and the goblin archetypes here. And don't forget to join the Swift d12 Google+ community if you haven't already!

Posted by Richard Woolcock at 14:18 No comments: 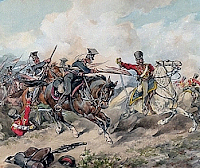 Posted by Richard Woolcock at 02:27 No comments:

Yesterday I did two Swift d12 playtest sessions with Manuel Sambs, one for Saga of the Goblin Horde, and the other for Manuel's Neon City Nights setting. We identified a few areas that need some work, but the one I'd like to talk about right now is "complications".

The Action Deck in Savage Worlds often treats clubs as complications, and that adds an unpredictable element of risk to rules like Chases and Dramatic Tasks, mechanics that I frequently use in my adventures. However Swift d12 doesn't use cards, and without complications it always feels like something's been lost when I convert the adventures. So after some consideration, I've come up with a generic complication mechanic.

Whenever the GM calls for an ability check, they may also declare a complication. The player should then roll two complication dice at the same time as their action dice.

Example: Big Brak is knee deep in the Northern River, fighting a minotaur, and the GM announces that his next attack has a complication due to the strong current. Big Brak rolls his Melee check and succeeds, killing the minotaur, but the complication dice roll double 4. The GM announces that Big Brak must now make a Muscle check with a -4 penalty (because of the double 4); on a failure he'll be swept away by the river.

I think this captures the unpredictable feel of complications, without the need for cards. It's also a unified mechanic that can be applied to any ability check at the GM's discretion, rather than a "special case" rule that applies to specific subsystems, and I think that should make it more flexible and intuitive to use.

Posted by Richard Woolcock at 07:02 No comments: 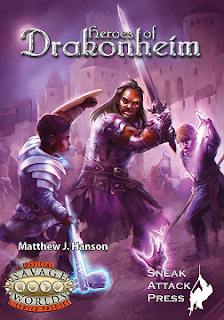 The Drakonheim Savage Companion was released back in November last year, and contains all the additional rules, races and abilities needed to play in the Drakonheim setting using Savage Worlds.

But the companion wasn't the only product I worked on for Sneak Attack Press. I also converted Heroes of Drakonheim to Savage Worlds, a trilogy of adventures covering the major events leading up to the situation described in the setting book.

It's a great way to introduce players to the setting, and you can buy it here:

Or as part of a bundle with the setting and companion here:

There's a preview of the final adventure here, in which the heroes have to use their limited time to explore ruins, recruit allies, and prepare the city's defenses to hold off an invading army.

Posted by Richard Woolcock at 03:42 No comments: 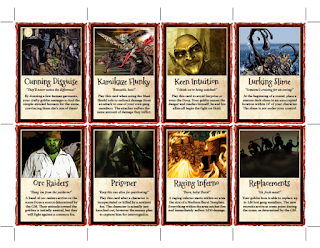 One of the cooler accessories for Savage Worlds is the Adventure Deck. Much like the Drama Deck in Torg, or (if you go back to the mid 80s) the Whimsy Cards for Ars Magica, the Adventure Deck provides players with a structured way to influence the story, allowing them to introduce new enemies, love interests, and various other unexpected plot twists.

It's not unusual for individual settings to offer their own custom Adventure Cards, which can be inserted into the larger deck to provide players with new setting-specific options. And of course many Savage Worlds fans also create their own Adventure Cards (someone even offers a tool for creating your own).

Snate56 on the Pinnacle forums asked if I was planning to create some custom Adventure Cards for Saga of the Goblin Horde, and suggested a Kamikaze Meat Shield card. Although I don't have very much goblin-themed artwork suitable for Adventure Cards, I just about managed to scrape up enough for eight of them. Unfortunately they don't have a consistent artistic style, but I've had to make do with what I've got. They're not bad though - and they're perfectly functional.

It was an interesting little project, and it's given me a much better idea of how to go about creating my own decks (a skill I'll need for the Campaign Deck, as well as some of the other deck ideas I've been considering). While the process will be rather different for PoD cards, it's still nice to be able to offer a PDF version (I'm really glad I bought the official Adventure Deck as a PDF before Pinnacle pulled it from sale).

You can download the Adventure Cards direct from here. It's quite a large file; as it's intended for printing, I've left the resolution at 300 DPI.
Posted by Richard Woolcock at 12:18 No comments:

Can of Wyrms: One Sheet 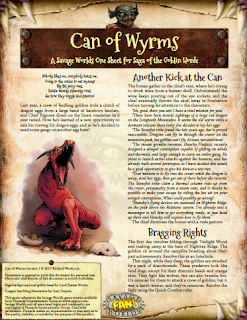 In March last year I released Egg Hunt, an Easter themed One Sheet for Saga of the Goblin Horde. When I was updating the trade dress on my One Sheets in September last year, I had to adjust the text to make everything fit, so I decided to add a teaser about a possible sequel.

With Easter approaching, I decided to write the follow-up adventure, drawing inspiration from a conversation I had with Manuel Sambs. Having written one adventure where the characters fired themselves from catapults across the city, using their own gang members as cushions, and another adventure where the players stole an entire tavern and surfed it over a waterfall, I mentioned how it was going to be difficult to up the ante much further. Then I came up with the idea of fighting over a volcano on hang gliders...

Hang gliders weren't really an appropriate thematic fit, so I decided to use ornithopters instead. Gremlins love building crazy mechanical devices, after all!

And if you've not seen it already, don't forget to check out my interview on the Wild Die Podcast, where I talk about some of my future plans for Saga of the Goblin Horde. You can also join the Facebook group if you have questions about the setting, or just want to follow the latest news.
Posted by Richard Woolcock at 07:34 No comments: