Random Musings about Taunt, Intimidation, and Game Design in General 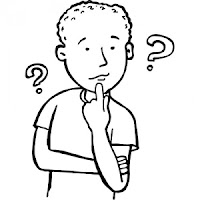 I've sometimes wondered if it might make sense for Taunt to be resisted with Spirit rather than Smarts, as willpower strikes me as being more important than intellect when it comes to ignoring insults. Some might even argue that characters with low Smarts should find it easier to resist Taunt, as it's difficult to insult someone who doesn't even understand they're being insulted.

The reason for the design is obviously to help differentiate Taunt from Intimidation; if Taunt was based on Spirit you'd have two skills that effectively did the same thing. As Clint has said in the past, both skills can be used for the same effects, it's just the approach that differs. In short, both skills are trappings for the same ability.

This makes me wonder if it's really necessary to have both skills. Couldn't there just be one skill, and let the player decide if they'd rather to narrate their action as "intimidating" or "taunting"?

Or perhaps the skill could be dropped entirely, with Test of Will becoming a Spirit-based maneuver? Agility and Smarts already have the Trick maneuver, while Strength has the Push maneuver, so why not give Spirit its own "Test of Will" maneuver? That would give a small boost to the Spirit attribute, but I see no harm in that, particularly after the recent update to the Shaken rule.

For those who prefer treating Intimidation and Taunt as skills, how would you feel about adding three more skills, so that Tricks and Push are no longer based on attributes? Then you'd have the following five skills:


I wouldn't personally be keen on this approach, because I like having Tricks and Push as free combat maneuvers. It means that everyone can contribute in battle, even if they don't have combat skills - and this is one of the things I like best about the Savage Worlds combat system; nobody is useless.

But what makes Taunt and Intimidation different? They're certainly not more powerful than the other maneuvers - in fact Tricks are usually the better choice in close combat, because your allies also benefit from your foe's reduced Parry. Is it just that most of us instinctively follow the rules as written, without really questioning them?

Having the Guts for Change

In earlier editions of Savage Worlds, Guts was a standard skill linked to Spirit. In Savage Worlds Deluxe the Guts skill was dropped, and now you just roll Spirit instead (unless the specific setting calls for a Guts skill). Most people loved this change, but a few people had already used it for a long time as a house rule, so it wasn't exactly an innovative secret. Why then did so many people wait until the rule change was official before they started using it?

Perhaps most of us just stick with things because that's "the way it is", and it's certainly true that newbies are discouraged from experimenting with house rules until they've become familiar with the system.

But I think sometimes it's worth taking a step back, looking at the bigger picture, and trying something new.

Email ThisBlogThis!Share to TwitterShare to FacebookShare to Pinterest
Labels: Intimidation, Savage Worlds, Taunt, test of will

Bone of Contention: One Sheet

I just wrote another One Sheet,
Creating it proved quite a feat;
I filled it with bad puns,
And undead ninja nuns,
And a goblin who's slightly effete. 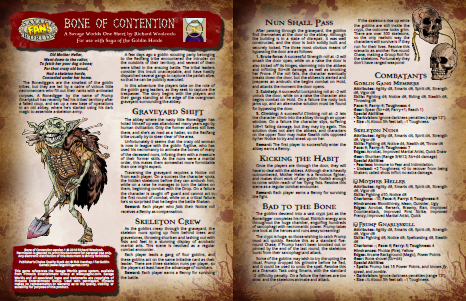 You can download it from here: Bone of Contention

Posted by Richard Woolcock at 17:09 No comments: