The Tricube Tales One-Page RPG for March has now been released: Welcome to Drakonheim!

“Long ago, during the days of the Cevali Empire, a mighty hero slew a powerful dragon and used her bones as the foundations of Drakonheim—the “City of Bones.” After the empire’s gradual decline and eventual collapse, Drakonheim became an independent city, an oasis in the wild lands.

Several months ago the city was attacked by a hobgoblin army. Defeat seemed inevitable, until a cabal of necromancers raised an undead horde and turned the tide of battle. Although the threat was defeated, skeletal soldiers still patrol the streets; the City of Bones has earned its nickname once again.

You are a party of adventurers, visiting Drakonheim in search of fame and riches. Maybe you’ve heard of the Gray Society—the necromancers who saved the city—and wish to meet them, or even join their order. Or perhaps you view them as a dark influence that needs to be stopped.”

I've blogged about Drakonheim quite a bit in the past, but to briefly summarize: I backed the Kickstarter for a system-agnostic setting called Drakonheim: City of Bones several years ago, and I liked it so much that I contacted the publisher and offered to write the Drakonheim Savage Companion for it, as well as convert the Heroes of Drakonheim adventures to Savage Worlds.

Now that I'm releasing monthly micro-settings for Tricube Tales spanning a range of different genres, I thought it would be fun to revisit Drakonheim, so (after asking Matthew J. Hanson of Sneak Attack Press for permission) I've gone ahead and designed a Tricube Tales micro-setting that also serves as an introductory scenario to the full setting.

You can run Welcome to Drakonheim on its own, which is ideal for a one-shot, or combine it with the Drakonheim: City of Bones and Tricube Tales books for a full campaign (perhaps using the Hack and Slash genre rule to give PCs ranks). 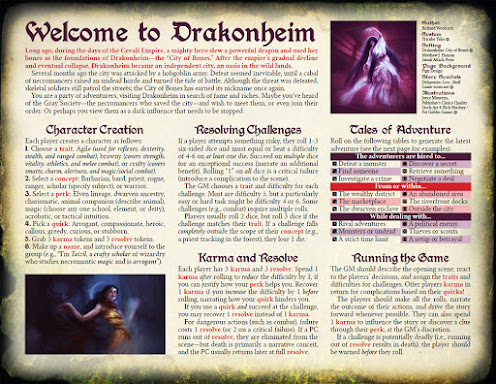 Posted by Richard Woolcock at 04:37 No comments: