Lulu recently did a complete redesign of its website, leading to a number of lingering technical problems, so I decided to move the print-on-demand version of Tricube Tales to DriveThruRPG. This required a full redesign of the print-ready files, and so I decided I might as well take the opportunity to incorporate the feedback I've received over the last 6-7 months (the previous version was published in February). By expanding the page count (from 52 to 59), I was also able to eliminate the blank pages at the end of the book. 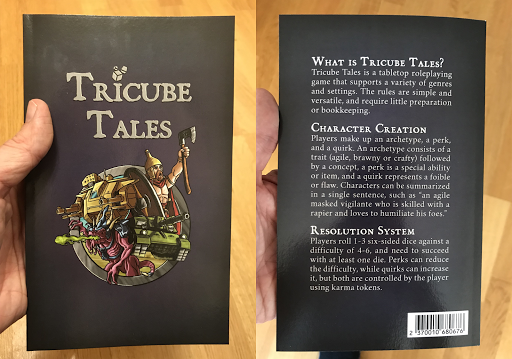 The PDF versions of Tricube Tales have also been updated to version 4, and they can be downloaded as usual from the product page here. As always, you can download the full phone PDF for free by clicking on the Publisher Preview.

Aside from a few minor cosmetic tweaks (and updating the credits and contents), here are the changes:

I'd also like to stress that none of the rules have changed, so if you've got the earlier version it's still 100% compatible with the current rules. All I've done is clarify a few things that people found unclear, and expand a few areas that hadn't explicitly been covered.
The printed version is 5"x8", as DTRPG didn't support the smaller pocketbook size, but I actually quite like the larger book now that I've gotten used to it. The font size of the body text is around 13, which is quite large, but I actually find it pretty comfortable on the eyes (at least, on my old eyes!).
Goblin Gangsters
I also decided to try my hand at another one-page RPG, based on the same template I'd used for The Fools Who Follow. This time I tried to adhere more closely to the Tricube Tales rules, and I designed the game as a prequel to The Gobfather.
You can download it here: Goblin Gangsters (click on the Publisher Preview to download the full PDF for free). 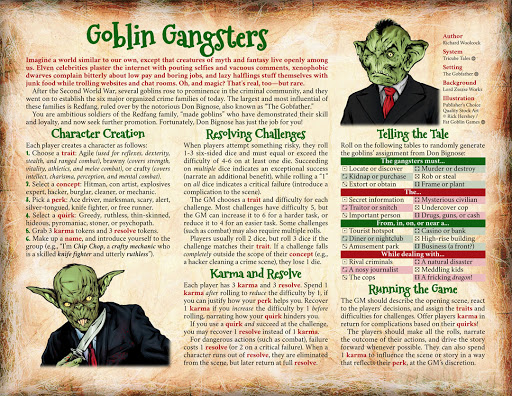 Overall I'm very pleased with it, I think Goblin Gangsters does a good job of capturing the essence of the Tricube Tales system while also serving as a light introduction to The Gobfather, and it all fits on a single page!
One-Page RPGs as example settings?
Although Tricube Tales does include a number of genre rules and even a few example scenarios, it doesn't have any real settings of its own, and I think that can be a weakness (from a marketing perspective) for generic systems. That's something I'd like to address in the future.
I think Savage Worlds owes much of its success to the wide range of settings it offers, and the popular TinyD6 games often include a selection of micro-settings in the back of their rulebooks. Perhaps I could offer some micro-settings for Tricube Tales in the form of a library of one-page RPGs? It's certainly something to consider, and much more realistic (from an effort perspective) than writing full settings.
Posted by Richard Woolcock at 01:18