Tricube Tales: Using Saga of the Goblin Horde (and other Savage Worlds settings) 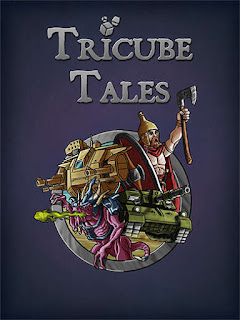 Back in March, I released a One Sheet RPG called Tricube Tales. The reception was pretty lukewarm, but from the little feedback I did receive, it was clear the rules needed some detailed explanations and lots of examples. Then DriveThruRPG started promoting their new Phone PDF format, and I thought "Why not? Tricube Tales is designed for low-prep gaming -- and having it on your smartphone would be pretty convenient!"

So I expanded it to around 5000 words, adding examples and explanations along with optional rules for different genres, and last week I published it as a 38-page Phone PDF. I made the full PDF available as a free download, but for $1 you also get the tablet version (at 4:3 screen ratio with higher-resolution art) and a Word document (I've released the system under the CC BY 3.0 license, and the Word document is easier for copying the text into your own products).

Check it out if you haven't already: Tricube Tales

Of course, as soon as I published it, I was asked how Tricube Tales could be used with Saga of the Goblin Horde! So here's how I would do it (note that most of these guidelines could also be applied to other Savage Worlds settings):

While Tricube Tales doesn't have individual skills, it does use character concepts to define scope of knowledge -- for example, if Saga of the Goblin Horde calls for a Tracking roll at -2, that would be treated as a standard crafty challenge, but characters without an appropriate concept (such as hunter, tracker, scout, etc) would lose a die from their roll.

For combat encounters (including Quick Combat and Quick Skirmish), use the Hack-and-Slash genre rule from Tricube Tales. It should be pretty easy to eyeball monster stats using the SotGH bestiary as a reference.

Chases could also be resolved mechanically in the same way as combat, the difference is you're trying to escape from (or catch) your opponent, instead of defeating them.

Optional Initiative: If you're a diehard fan of the Savage Worlds initiative system, you could easily use it for Tricube Tales instead of the normal narrative-based approach: PCs normally draw one card each turn, but they may spend a karma token to draw a second card if they have a suitable perk (or draw two cards use the lowest by using an appropriate flaw). Monsters typically draw one card, but if they're particularly fast or slow, the GM should draw two cards and keep the highest or lowest. If a PC draws a joker, the difficulty of all their rolls this turn is reduced by 1; if a monster draws a joker, the difficulty of all rolls made against them this turn is increased by 1.

Minions are usually abstracted away in Tricube Tales, but they're a major part of Saga of the Goblin Horde, so I recommend adding a new mechanic for them: Gang tokens. Each player starts with three gang tokens, and they can increase this maximum with advances in exactly the same way as karma and resolve (i.e., every second advance can be spent on a gang token instead of karma or resolve, up to a maximum of six). Gang tokens are usually recovered at the beginning of each adventure (unless the boss has the opportunity to recruit replacements during the session, at the GM's discretion).

Meat Shield: If physical damage from a challenge roll would lead to the loss of one or more resolve, the player can spend one gang token instead.

Shenanigans: At the beginning of each scene, you can recover one karma token by rolling d6 on the Shenanigans table and narrating an appropriate effect.
The SotGH "Loner" Hindrance isn't a very good fit for Tricube Tales. but if you really want to use it (perhaps for converting an existing character, such as Kronan Halfblood from the archetypes PDF), treat it as an optional extra that players can choose during character creation if they wish:

Loner: This boss doesn't have any gang tokens, and can never gain any. However, they begin with 4 karma and 4 resolve tokens, instead of the usual 3.

If you want magic to feel like Savage Worlds, use the Spell Lists option from the Magic & Psionics genre rule in Tricube Tales, except each character starts with three spells instead of six, and must spend an advance to gain each additional spell. Use the flavor text from the Savage Worlds powers and trappings as a guideline for determining what your character can do.

However, I'd personally suggest keeping things simple: allow players to choose a general style of magic, such as pyromancy, shamanism, etc, and pick one Magic Limitation for it. Don't bother tracking individual spells.

Equipment is abstracted in Tricube Tales, and I don't recommend changing that. Players can make a note of their knick-knacks for flavor purposes if they wish, and even incorporate them into the descriptions of their actions, but don't bother applying specific mechanical effects.

Earning Bennies: SotGH adventures often suggest awarding Bennies for certain achievements during a scene. It is generally recommended that you don't award karma in these cases, or the players will probably earn too many tokens, and then won't need to use their quirks.

Interludes: You don't really need a deck of cards, the player can just make up a short story in return for a karma token (this can temporarily take them up to one token over their normal maximum). However, if you're using the Saga of the Goblin Horde Countdown Deck anyway, the player could draw 1-3 cards and use their saga symbols as inspiration for the tale.

Dramatic Tasks: The challenge requires 5 effort tokens (usually at standard difficulty), and the player must remove all the tokens in 5 turns. If you're using the Countdown Deck and want to spice things up a bit, draw a card each turn, and on clubs the difficulty increases by 1 for the turn (don't be tempted to treat failure on clubs as a critical failure though, it'll be too risky due to Tricube Tales' lack of rerolls and cooperative rolls).

Social Conflicts: The challenge has 5 effort tokens (usually at easy difficulty), and the player has to remove as many as possible in 3 turns. The number of tokens removed indicates the margin of success.

Savage Worlds is a rules-medium roleplaying system with a strong emphasis on combat, and abstract rules for handling a variety of other situations. If you enjoy tactical combat using minis, it's great, and would be one of my top picks.

Tricube Tales is a rules-light roleplaying system with unified mechanics and a focus on narrate-based gameplay. It draws inspiration from games like Fate, Blades in the Dark, Risus, Tiny Dungeons, and Blood & Bile, and it's designed to be very fast and easy to play.

I think you could certainly use Tricube Tales to run Saga of the Goblin Horde, particularly for one-shots, but the emphasis would be more on the story and player narrative, and far less on game mechanics. Combat would take a backseat role, becoming just another type of challenge for the bosses to overcome -- it would be a bit like running Saga of the Goblin Horde in Savage Worlds, except treating every combat encounter as a Quick Skirmish.
Posted by Richard Woolcock at 05:59 1 comment: