Tales of the Goblin Horde & The Goblin Warrens

“For time immemorial, goblins have been mercilessly hunted down and murdered by the so-called “civilized” humans, slaughtered in droves for the entertainment of bloodthirsty adventurers. But everyone has their limits, even the underdogs.

The pathetic goblins who eke out a living near the human lands are weak and timid, the aggression bred out of them through generations of culling, with only the most cowardly among them managing to survive. But the goblins of the western tribes are another matter entirely, as the rapidly encroaching scourge of human civilization is about to discover.

You are ferocious goblin bosses from the Redfang tribe, leading your gangs on a series of dangerous missions against the humans and other enemies. Chief Bignose is confident you won’t let him down!”

I published Saga of the Goblin Horde for Savage Worlds back in 2017, and I even won a Silver ENnie Award for it, but I've also used the setting for several other projects. It was the basis for a 200-word RPG called The Goblin Warrens, as well as Hightree Warren for Gold & Glory, and the Wiseguys crossover The Gobfather (which was in turn referenced by Goblin Gangsters). And of course, the work-in-progress Swift d12 Quick Start uses Saga of the Goblin Horde, as will the full setting book once I've finished it. 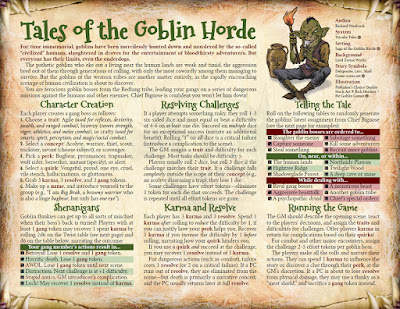 I've previously discussed converting Saga of the Goblin Horde to Tricube Tales, but now that I'm releasing a new micro-setting every month, I decided I should do the job properly! Unlike the other Tricube Tales micro-settings, this one actually adds some new mechanics (via gang tokens), and includes additional guidelines for turning the one-page RPG into a full campaign.

Earlier this month, I also decided to update, reformat, and republish The Goblin Warrens for the Pleasure-not-Business Card RPG Jam, which was an interesting challenge! Business cards seem to be a pretty good size for 200-word RPGs.

Posted by Richard Woolcock at 03:29 No comments: