Guild of Shadows: Character Builder and the Thief Edge

One of the Kickstarter projects I backed that I've been particularly looking forward to getting my hands on is Guild of Shadows - a dark urban fantasy setting based around the nefarious activities of a thieves guild.

With the project now so close to completion, I was recently hired to take a look over their mechanics, making any final edits for balance and consistency. As I'm a big fan of the genre, I also took the opportunity to propose a further 14 Edges and 3 Hindrances, all inspired by various rogues from history or fiction.

I've obtained permission to produce a web-based character creation tool for the setting, which you can access here:

I'd also like to give an overview of a potential problem with the Thief Edge that some may have already wondered about, along with my solution...

The Thief Edge in a Thief Setting

The Thief Edge is particularly nice in that it also boosts Climbing and Lockpicking, as well as trap-related uses of the Notice and Repair skills. The large number of bonuses are somewhat balanced by the fact that it's usually a fairly niche Edge, and has some very tough requirements.

However because Guild of Shadows is an urban thief-focused setting, the Thief Edge is no longer even remotely niche - it boosts several of the most useful skills, and is the only way to get a Stealth bonus. When I ran a similar style of campaign in the past, most of the players invested in Thief simply because it was so useful.

But it gets worse. The tough requirements mean that each Thief also needs to boost one attribute, and assign around half of their skill points in a specific way, leaving them much less room to differentiate themselves from each other - and even if they're able to stand out in smaller ways, because most of their starting points are tied up in heavily boosting the same set of abilities, they're still likely to feel quite similar to each other (at least mechanically-speaking).

Removing the Thief Edge wasn't an option, because Guild of Shadows is designed to be slottable into existing settings and campaigns if the GM wishes, and such campaigns could well have characters who have already taken the Edge.

So I approached the problem from a different angle, and added two new Edges: Highwayman and Urban Ranger. Like Thief, they are Professional Edges, which means their bonuses don't stack with each other - thus there are now three different Edges which grant the much-coveted +2 Stealth bonus, each of which provides other benefits as well, and Urban Ranger also has a 'backdoor' through another Edge. The end result is that characters in Guild of Shadows can obtain that +2 Stealth bonus without sacrificing diversity.

Posted by Richard Woolcock at 12:43 No comments:

There are no explicit rules for disguises in Savage Worlds - somewhat ironically, not even the Disguise power allows you to simply disguise your appearance, it only lets you impersonate a specific person.[Reference]

The recommended approach is usually to treat disguise as a Persuasion roll (to convince people that you're someone else), or in some situations a Stealth roll (if you just want to appear nondescript).[Reference]

However a recent discussion about Stealth made me wonder if perhaps the disguise mechanics could be a bit more clearly defined. In particular, applying the active/inactive guard concept (which is normally used for sneaking) to disguises would seem to make a lot of sense.

My proposal is therefore as follows:

There are typically two parts to a disguise. The first part is your bearing and mannerisms, which are covered by the Persuasion skill, and the second is your physical appearance, which is covered by the Stealth skill. You don't roll when applying a disguise, instead you roll when other people interact with you.

Attentive observers make an opposed Notice roll against your Persuasion (typically only once per scene unless something occurs to draw additional scrutiny), and if they succeed they notice that you're acting strangely. They can then make another opposed Notice roll against your Stealth to try and penetrate your disguise and determine your identity - or at the very least, they will recognise that you're trying to disguise your appearance, and notice any distinctive features.

If an observer beats your Persuasion but not your Stealth, they will only realise you're an imposter if you're impersonating a specific person, and they're familiar with that person. Otherwise they'll usually just do a double take, then continue with whatever they were doing.

Here's a new Edge to take advantage of the expanded disguise rule:

Posted by Richard Woolcock at 06:07 No comments: 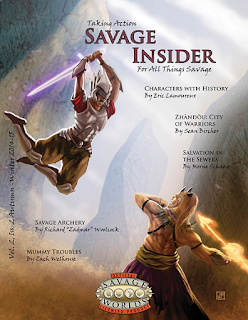 Savage Insider volume 2 issue 2 has been released, and it includes my first "officially" published article: Savage Archery. Here's an overview of my article, for anyone who's not yet bought a copy of Savage Insider, along with some insight into the weapon design guidelines.

Savage Archery gives an overview of ranged combat, along with some tips and tactics for creating and playing an archer. There are also three pre-generated starting characters: Egil, Robin Hood, and William Tell.

After that comes a two-part weapon design system: Choose a type of bow (self, composite or compound) or crossbow (standard, arbalest, repeating or pistol), and then apply a draw-string pull (light, medium, heavy or great). The section finishes up with several archery accessories, such as tabs, bracers, and sights.

The next section covers arrows, which consist of a shaft (wooden, footed, fiberglass, aluminum, or carbon), head (pile, soft, bodkin, broadhead, blunt, fire cage, forked, signal, bowfishing, or quarrel) and fletching (handled as cosmetic trappings, to give each archer a unique flavour).

Finally there's a section on botches, which includes a critical failure table for archers.

One of my design goals with the bow and crossbow creation system was that the weapons should be backward compatible with those in SWD. This was a bit tricky, because the English longbow costs $200, while the standard bow costs $250. After some consideration I realised that it's never specified what type of bow the "bow" is - if it were a composite bow, then of course it would make sense for it to cost more. Following that assumption, each weapon can be created as follows:
But of course you're no longer limited to those three weapons. You could create a medium-pull self bow for example, it would have the same stats as the regular bow but cost only $100, however it would be long and cumbersome, and therefore difficult to use from a mount. Or you could create a heavy-pull composite bow for $500, it would be as as powerful as the English longbow but smaller and easier to carry around (a great choice for a mounted archer).

You could even create a medium-pull standard crossbow - it would have range 12/24/48, require Strength d4, have a weight of 6 and cost $250, but the quarrels would only have AP 1 (due to the weaker pull).

I choose to justify the AP of the crossbow through its quarrels rather than as an innate bonus of the weapon itself - so the quarrel is what gives the crossbow its AP 2. This means an archer can also gain AP (by using hardened bodkin arrowheads). However arrowheads only provide their full bonus when using a heavy-pull bow, and most people are only strong enough to use heavy-pull crossbows (because of the lower Strength requirement).

While the archer can raise his Strength to d8 to utilise a heavy-pull bow, the crossbowman can use that same advance to take the new Crossbow Speed Shooting Edge, so I think the two options (archer and crossbowman) should balance out.

Disclaimer: The compound bow also reduces the Strength requirement in the same way as a crossbow, however it's a modern weapon, and should therefore be compared with modern crossbows (which can be fitted with optic scopes).

The Automatic Fire rules state that the Rate of Fire (RoF) is multiplied by the number of Shooting dice to determine how much ammunition is actually used. Thus by giving the repeating crossbow RoF 2, it will indeed fire 4 bolts per round.

However the article also described how the repeating crossbow could be modified to fire 2 bolts at a time. While the Double Tap maneuver might seem a thematic fit for such an option, I felt it would make the modification a no-brainer, so instead I had it give a slight damage increase along with a range decrease.

The modified variant also allowed me to justify the Suppressive Fire maneuver. Suppressive Fire uses five times the RoF of the weapon, which in this case would be 10 bolts in a 6 second round. While that's fine for guns, the Chinese repeating crossbow is simply not able to fire bolts that fast - however the modified version can shoot twice as many bolts (8 in 6 seconds), which I felt was close enough.

Savage Archery was a fun article to write, and quite a lot of thought went into the weapon design system. If you like my other fan stuff then I think you'll enjoy this article as well.

But of course that's just one article, and Savage insider is packed with loads of excellent content by a number of different authors. Please do check it out if you haven't already.

Posted by Richard Woolcock at 15:01 No comments: