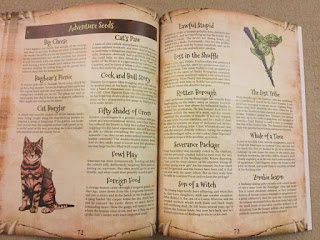 Posted by Richard Woolcock at 06:45 No comments:

Building a fanbase on DriveThruRPG

Last year I started looking for alternative places to host my Savage Worlds PDFs. My work was becoming increasingly popular, my library of fan products kept growing, and my newer releases were far bigger than my older ones (due to their higher resolution artwork). The downloads were starting to become a significant drain on my bandwidth.

So I asked Pinnacle if I could release fan products on DriveThruRPG/RPGNow, as long as they were all completely free. Danny James Walsh (the Savage Worlds Licensee Manager) replied on the forums that "As long as you're using the Fan licence (and its terms), then you can distribute it for free wherever you like". In fact if you look on DriveThruRPG/RPGNow, you'll see that several other people are now offering fan licensed products there!

However it was mentioned by Ndreare in the same thread that, based on a conversation from a few years earlier, OneBookShelf (who own DriveThruRPG and RPGNow) expected publishers to sell at least one product before distributing free content. Private discussions with fellow game designers seemed to suggest that, while this might no longer be a strict requirement, it was still encouraged.

But around the same time, I discovered Google Drive. As I had no plans to sell anything in the near future, it just seemed easier to use Google Drive for hosting my PDFs. However in retrospect, I think that was a bad idea, at least for Saga of the Goblin Horde.

The Blackwood: Doing it Right

Eli Kurtz ran a successful Kickstarter for his awesome setting, The Blackwood. But he didn't come out nowhere - he first established himself by releasing a few One Sheets and some archetypes on OneBookShelf under the fan license. This meant that when his Kickstarter was ready to launch, he already had a captive audience; he knew how many people had downloaded the freebies, and he was able to email them the latest news.

While browsing DriveThruRPG recently, I came across Stargazer Games (of Warrior, Rogue & Mage fame) and noticed that all of their products are free. So I decided to bite the bullet and email OneBookShelf, explaining that I plan to sell products for my own roleplaying system in the future, once it's ready for publication, but first I hope to build up an audience for Saga of the Goblin Horde by offering the free Savage Worlds version of the setting.

A OneBookShelf representative replied and said I was welcome to release free products. He said that quite a few other publishers use the same approach to build up a fanbase (and that some end up only releasing a few free products and leave it at that), so I went ahead and signed up as Zadmar Games!

Registering for a publisher account was as simple as clicking a button and filling in a few details. I was then presented with a short video that gave an overview of my options, and links to various pages I could read for help. It all seemed pretty straightforward, so I went ahead and uploaded the Saga of the Goblin Horde setting book.

As my account is still unverified, I have to wait for my uploads to be approved, and I don't have access to all the publication tools. But the process is still pretty quick and painless, so I'm planning to upload the other PDFs when I get the chance (although I will give each another round of proofreading first).

If you're planning to self-publish your setting, DriveThruRPG seems to be a very good place to do it, and I think Eli's approach with The Blackwood is a great way to build up an audience while applying to Pinnacle for a publication license (this is the approach I now recommend to other people).

If you're not able to get a license, you could always split up your setting like Drakonheim, which offers both a system-agnostic setting book and a Savage Worlds companion (Sneak Attack Press is obviously a licensee, but if they weren't they could still have offered the companion under the fan license, while selling the setting book). Or you could follow the approach I'm taking, offering the setting for free under the Savage Worlds fan license, and then converting it over to another system for commercialization.

But regardless of the route you take, I think it's well worth getting to grips with the DriveThruRPG publication tools beforehand, and establishing a fanbase early on. Then when you're finally ready to go live, you should already have a captive audience who are interested in your products, and the means to easily reach out to them.
Posted by Richard Woolcock at 00:14 No comments: