I recently had an interview on the Dieku Podcast, where I talked about my introduction to gaming, how I got into Savage Worlds and self-publishing, and about my Tricube Tales system. You can watch the interview here:

While talking about the origins of Tricube Tales, I also mentioned Swift d12, and this got me thinking about the two systems. Although I did run several successful playtests with Swift d12, I was never entirely happy with it -- but it does include a lot of options for character advancement, which is good for longer campaigns (one of the weaknesses of Tricube Tales). So this got me wondering if it might be viable to merge some of the concepts. 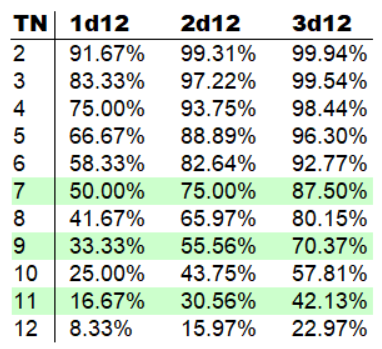 Tricube Tales allows you to lower the difficulty by 1 using a perk, and by a further 1 when fighting lower-ranked foes using the Hack-and-Slash genre rules, but that means even in the most extreme case (using a perk against a lower-ranked foe) the difficulty is 2/3/4 for an easy, standard, or hard challenge respectively. Thus rolling 1 is still a failure, and easy/standard/hard challenges each have a different TN. You can't lower the difficulty by more than 2 without breaking the resolution mechanic.

But replacing the d6s with d12s gives you more wiggle room, allowing you to lower the difficulty by 5. This would allow the return of separate traits (something I had to drop from Tricube Tales), so instead of rolling an extra d12 for challenges related to your trait (agile/brawny/crafty) you'd have different ratings in each, and add your trait to the roll.

I would give players 5 points to distribute among their traits (agile, brawny, and crafty), with each trait having a range of 0-3. Challenges would require rolling 2d12 and adding the appropriate trait against TN 8/10/12 for easy, standard, and hard difficulty respectively (as usual, the two dice would be compared separately, not added together). For challenges that fall entirely outside the scope of the character concept, the player would roll a single d12.

Perks could then work more like the Swift d12 feats, which provide a variety of predefined abilities and bonuses (rather than being freeform). Many of the feats are classified as "stackable", meaning they can be taken up to three times. So you might have an Alertness perk which gives a +1 bonus to perception, and you could take up it to three times -- you'd then add it to your crafty trait when making perception checks so (for example) a character with crafty 3 and alertness 3 would apply a +6 bonus to their roll, against a difficulty of 8 (easy), 10 (standard) or 12 (hard).

These changes would obviously add complexity. In particular, they would require the introduction of a long laundry list of perks, which is something I intentionally avoided in Tricube Tales (mostly because I didn't want people looking things up during play). But they would also add granularity and varied character options for long-term campaigns, and could be expanded with other Swift d12 features (such as the combat rules, allowing a similar style of tactical combat to Savage Worlds for those who want it).

Furthermore, it would be very easy to convert a Tricube Tales character across to these new hybrid rules, simply giving a character 3 points in their primary trait and 1 point in each of the others. Tricube Tales-style perks could still be used (they'd just give a +2 bonus, but wouldn't stack with fixed-bonus perks), and Swift d12 already has rules for karma and quirks (called "flaws", that's actually where I got the original idea for quirks in Tricube Tales).

I don't want to change Tricube Tales, but perhaps this would be a good direction to take Swift d12 when I finally get around to revisiting it -- have it work more like Tricube Tales, except with more granularity and character options.

While this is a small achievement compared to many publishers, it's still a personal milestone. I already have Gold and Platinum products on the Savage Worlds Adventurer's Guild, but promoting my own system has proven far more challenging.

However, each new micro-setting draws interest in the rest of the product line, and the recent Deal of the Day proved shockingly successful, so I thought the sales figures might be of interest to other publishers.

Here are the total sales for the entire product line since the first release:

And here is a breakdown of sales figures for the main products:

These are the "payment optional" products on DTRPG (in order of publication) -- people can download them for free, but I'm only tracking actual sales where people paid for them:

I also have a few freebies on Itch, which I entered into Jams. Here they are, once again in order of publication:

The high download numbers for Interstellar Bounty Hunters are due to a Discord community that built up around it. But in general, I have far more downloads on DriveThruRPG than Itch.

Posted by Richard Woolcock at 07:45 2 comments: