Every so often, someone will contact me asking where abouts on the Saga of the Goblin Horde map a particular adventure takes place. Although I did work out approximate routes when writing the adventures, I didn't bother recording the information, so I usually end up sketching a rough route on a map every time someone asks.

Well, I finally decided to mark up the official routes, using PDF layers so the user can enable whichever adventure they're currently running. I also added the place names and territory labels (adjusted slightly so that they no longer overlap), along with the title and compass, hex grix, and territory fog. The result is a high resolution map that can be fully configured simply by toggling different layers.

Here are a few examples of how the map can be configured in Acrobat Reader, by selecting the "layers" tab on the left side of the screen, and choosing which layers you wish to display:

Posted by Richard Woolcock at 12:04 No comments:

Gio Dal Farra (owner of GGstudio) invited me to Modena Play this year. It took place on April 6th, 7th and 8th, and was the first gaming convention I'd ever been to! I didn't quite know what to expect, but I had a fantastic time—I met a lot of really nice people, ate some delicious Italian food, and even had the opportunity to run a few games of Saga of the Goblin Horde.

On Friday morning Alessandro Aimonetto collected me at the entrance, gave me my pass, bought me coffee and a sandwich, and provided a quick tour. After that, I had the opportunity to explore the convention at my own pace. Most of the stalls were promoting board games; I did see a couple of others that had tabletop RPGs, but GGstudio had the largest and most diverse offering.

The language barrier proved to be my biggest challenge. Although many people understood English, almost all of the games were published and played in Italian. Fortunately I was able to make a note of the games that caught my interest, and I've found that many of them are also available in English :) I also had some great conversions with several other game designers, had the opportunity to look at their work, and gained some valuable insight into the industry.

On Saturday I met Giuseppe Rotondo, James Horton and Riccardo Giannico, and ran a new Saga of the Goblin Horde adventure for them (it's called "Back to the Roots", and I will release it in the very near future). I also used the Mutation Deck I designed for Just Insert Imagination :) Giuseppe later introduced me to several other game designer friends of his, we looked at some of the things other people were working on, and we talked about Gold & Glory and Blood & Bile.

I had another short visit to the con on Sunday morning, then left at 11:30am to catch my flight, which proved to be an entire adventure in its own right!

Anyway, here are some of the highlights. Click on the photos to enlarge them. 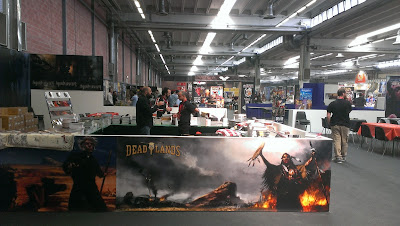 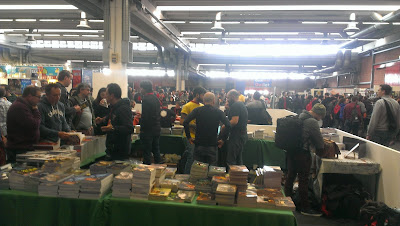 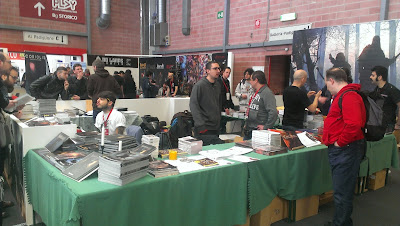 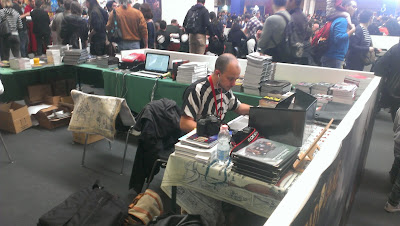 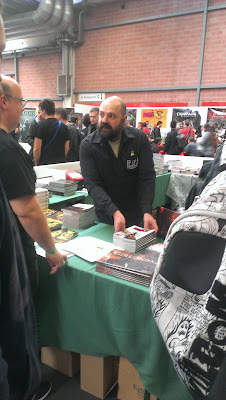 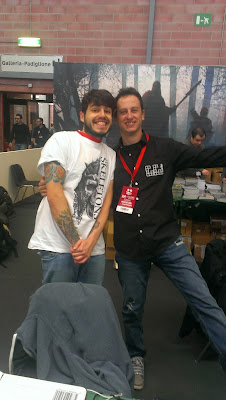 There were loads of translated Savage Worlds books (particularly for Deadlands), as well as some original Italian settings. I discussed the translation process with some of the GGstudio guys, and they raised some interesting points I hadn't really considered—for example, it wasn't enough just to translate the text of East Texas University, they also added a small section describing how the American school system works, as it's very different to the education system in Italy. 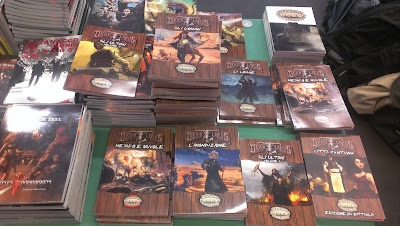 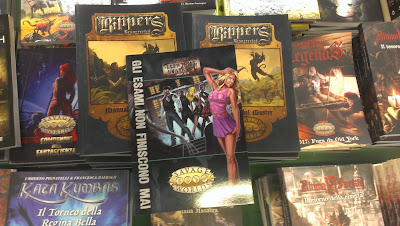 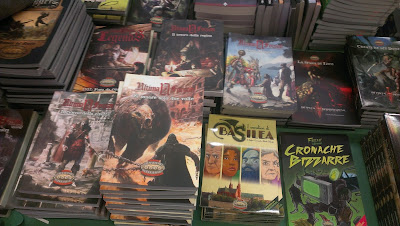 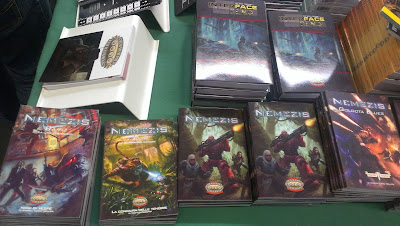 What can I say about Gold & Glory that I haven't said already? This is the ultimate toolkit for dungeon crawling in Savage Worlds, and impressed me so much that I offered to write a SotGH crossover adventure for it. GGstudio then translated my adventure to Italian, and offered it as a fold-out freebie at the con, but I don't know if they plan to release it in English as well. However I'm thinking of writing another one anyway, this time from the goblin perspective! 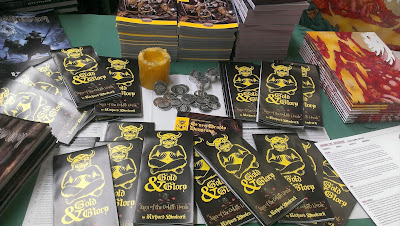 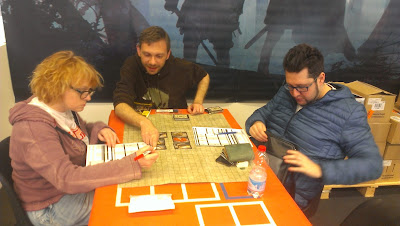 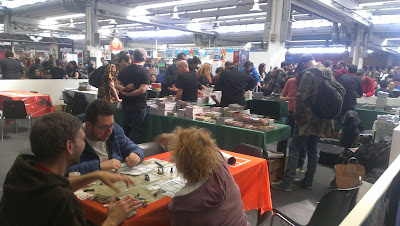 One of the games that really caught my attention was Fleshscape, by Emanuele Galletto. It's a minimalist RPG with a very unusual setting (a sort of Lovecraftian post-apocalyptic world covered in flesh, bone and sinew, with rivers of blood and puss, where the PCs are primitive hunters fighting for survive). Emanuele does all his own artwork, and admitted that one of the reasons he chose the theme is that he's not very good at drawing buildings! The concept is really awesome though, and the PDF is available for free on DriveThruRPG, so I'd definitely recommend checking it out.

Interestingly, the Italian version of Fleshscape has been condensed down to three pages, and printed inside a custom GM screen. That means you don't buy a book, you buy a GM screen, and it contains everything you need to play! I really love that idea, and could easily see it working for other minimalist RPGs as well (in fact GGstudio also offer a game called Golconda in the same format, although I didn't have the opportunity to speak to the author, and I don't think it's available in English). 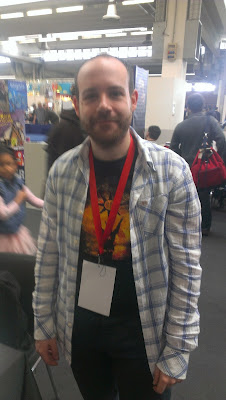 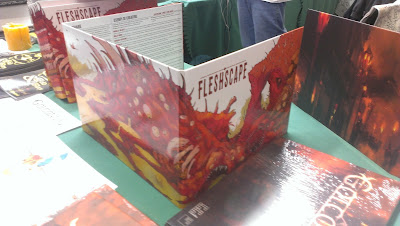 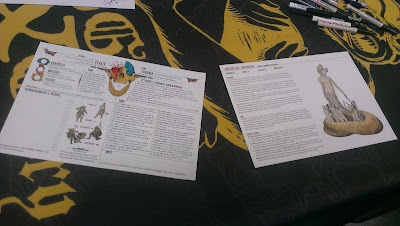 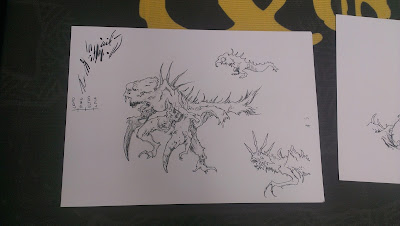 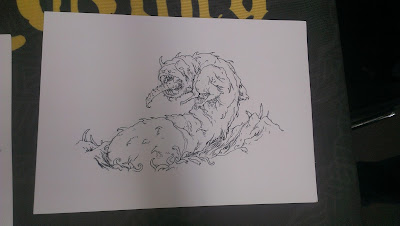 Umberto Pignatelli is a relentless writing machine, and he produces a lot of high quality stuff. But I was particularly intrigued by his Kata Kumbas solo adventure books. These initially appeared to be pretty similar to the old "Choose Your Own Adventure books" I read when I was younger, however they're actually a lot more intricate, with lots of little secrets, clues and minigames hidden within the artwork and maps. I really appreciate clever design mechanics like that, and would love to see more of them. 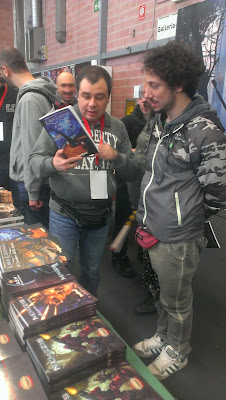 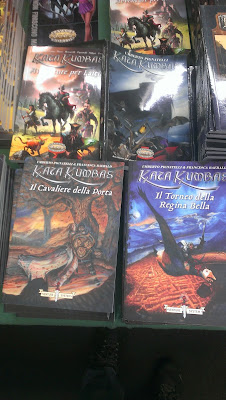 This is a new game that was being demonstrated quite extensively at the con. Cabal appears to be a sort of modern-day investigative horror/occult RPG, with a bit of a CoC/WoD vibe, and some evocative B&W artwork. I had a nice chat with the designers and they told me GGstudio are going to be translating it to English and converting it to Savage Worlds, so that'll definitely be one to look out for in the future! 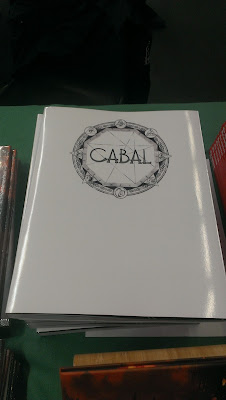 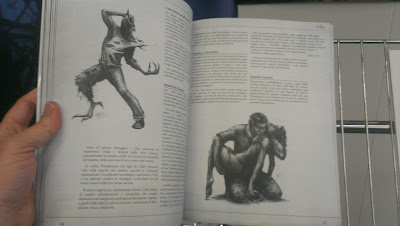 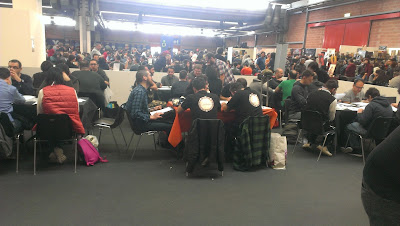 Of course there were loads of other interesting things as well. GGstudio had printed cloth maps for some of their settings, which is an awesome idea, and something I'd like to look into for Saga of the Goblin Horde. There were some other really nice looking games like Be-Movie, Golconda and Symbaroum, as well as Skeletons (a story game which I've read reviews about, and which I find a very intriguing concept).

I had the chance to flick through Nemezis, a setting I'd only heard of previously by name, and now I really want to play it (just based on the artwork alone)! I also saw a bunch of other products that caught my attention, such as Ultima Forsan, Night Witches, and Fiasco. I really need to start playing more games! 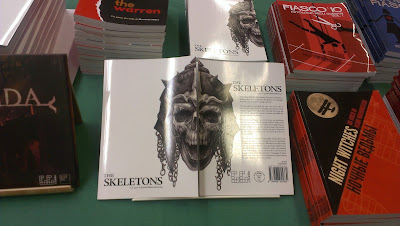 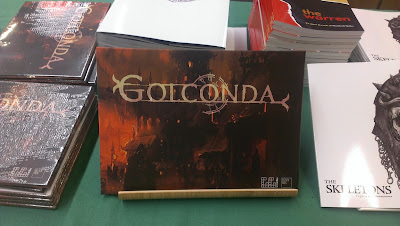 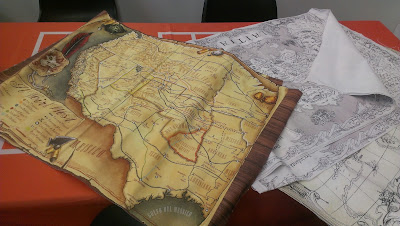 Overall it was an awesome and very memorable experience, and I feel very fortunate to have been invited. I made a lot of new friends, spoke to several of my fans, networked with many talented game designers, and gained a lot of insight into the RPG industry. So I'd like to say a big "thank you" to Gio and the rest of the GGstudio crew, and I look forward to seeing you again in the future!

The only thing I didn't enjoy was the trip home... 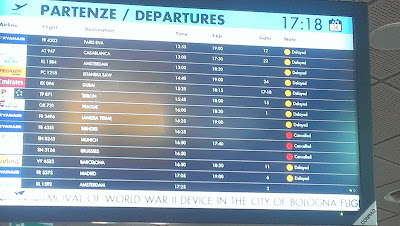 Posted by Richard Woolcock at 06:11 No comments: