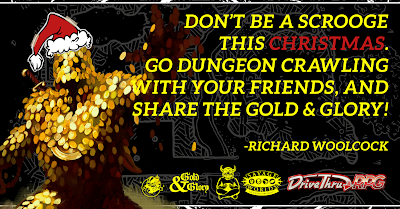 Gold & Glory was first released in October 2017, and I was immediately impressed by the way it blended old school concepts with modern game design, offering a versatile toolkit for dungeon crawls using the Savage Worlds ruleset. I even wrote a Saga of the Goblin Horde crossover adventure for it, called Hightree Warren!

You can buy it here: Ebenezer's Gold

Inspired by the protagonist of "A Christmas Carol", Ebenezer's Gold leads the adventurers on a search for a deceased money-lender's hidden treasure. The heroes will have to fight their way past possessed dolls, animated furniture, armies of toy soldiers, and more -- because in this dungeon, even the treasure fights back!

I've tried to keep the seasonal references subtle (at least compared to my earlier Christmas-themed adventures), so it can easily be used as a regular dungeon as well. The adventure is a little tongue-in-cheek, but it can also be run as a horror-based scenario.
Posted by Richard Woolcock at 15:04 No comments: