Earlier this month, Tricube Tales hit Electrum Best Seller on DriveThruRPG, and two of the micro-settings hit Silver, so I thought it would be a good time to take a look at what's new and what I've been up to.
Two More Interstellar Micro-Settings
Last month I released a bonus micro-setting called Interstellar Troopers, which drew its inspiration from various movies such as Aliens, Starship Troopers, and Pitch Black. But more importantly, I released it under the CC BY 3.0 license along with its Scribus template, allowing other publishers to use it for their own one-page RPGs.
On May 4th, I released this month's micro-setting, Interstellar Laser Knights, inspired by a certain space opera film franchise about psychic knights wielding laser swords in a distant galaxy. This was something I'd promised the members of the Bounty Hunters: Open Season discord server, as a thematic tie-in to my earlier Interstellar Bounty Hunters micro-setting.
Solo Rules
This month I also released the Tricube Tales Solo Rules, and they received a lot more attention than I'd expected, including coverage in this very informative video about simplicity and complexity in solo RPGs by Talking About Games:
I strongly recommend checking out Abraham's other videos too if you're curious about solo gaming, particularly his advice playlist, which is packed with great tips and suggestions.
The Solo_Roleplaying reddit and associated wiki are also an excellent source of information, and they have a Discord server (Lone Wolf Roleplaying) as well.
As my solo rules explicitly reference the Tricube Tales mechanics, I decided it was finally time to update The Fools Who Follow. As my first one-page RPG, it used a simplified version of the Tricube Tales rules (without traits, perks, or quirks), so I've updated it to be consistent with the other micro-settings and make it fully compatible with the solo rules. I've left the original version up as well though, in case anyone prefers it.
Media Coverage
Quirin on PnPnews wrote an article here (in German) about some of my products a while ago, which included a section on Tricube Tales. Andrew Girdwood has also written articles on Geek Native (here, here, here, and here) about some of the micro-settings, and I recently did a Tricube Tales interview for Parallel Worlds Issue 19.
This week, Tricube Tales received a much more detailed review here (in German) by Benjamin Dose on Teilzeithelden, which referenced a summary of the system from here (also in German) by Florian of jasminéfields.net.
Six months ago I talked about my plans for going forward, and about my hope that regular micro-setting releases would help draw more attention to the Tricube Tales system. It's slow going, but the strategy does seem to be paying off.
Metahuman Uprising Actual Play
TurnTablesRPG recently hosted a hilarious actual play of Metahuman Uprising, with some truly inspired characters. You can watch it here on twitch:
Character Cards
Tales of the Goblin Horde included form-fillable character cards, and Steve W asked in the Tricube Tales discussion section if I could add some for other genres. So I've added 45 form-fillable character cards as a bonus download to the Tricube Tales product (15 for fantasy, 15 for horror, and 15 for science fiction). I've also included the Scribus template, in case anyone wishes to create their own cards.
What's Next?
Tricube Tales now has a dozen micro-settings, but I'm still coming up with ideas faster than I can implement them! I'm planning to release Wardens of the Weird West next month, and I'd also like to expand the solo rules (the current ones only really cover urban settings). 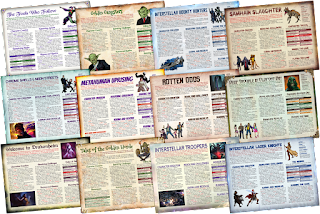 Posted by Richard Woolcock at 15:52