Generic roleplaying systems can easily end up feeling bland, and I think it's very important to offer some example settings. Tricube Tales does have a few simple scenarios at the back (tied in with the vehicle rules), but I don't think that's anywhere near sufficient to really capture the feel of a setting -- compare it with Savage Worlds, for example, which has an extensive library of setting books. Or look at some of the TinyD6 games like Tiny Dungeon or Tiny Frontiers, which fill half the book with micro-settings.

However, it takes a long time to write a full setting, even smaller settings can take a while, and it's simply too much work for me to handle on my own. This was part of the reason why I released the Tricube Tales system under a Creative Commons license, as I hoped other publishers might take an interest (and I was very excited to see Nathan Carmen use it for Heroes of the Cosmos). But I'd still like to offer something in the way of official setting support. 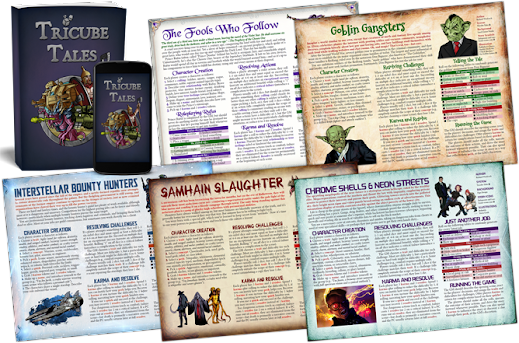 The One-Page RPG Jam 2020 motivated me to try my hand at writing a one-page RPG, and I decided to use the Tricube Tales mechanics for my game -- I figured that would provide a good cross-promotional opportunity, plus I wanted to see if I could compress the Tricube Tales rules down small enough to use for a one-page RPG. I'd also been wanting to establish a presence on itch.io for a while, and this seemed the perfect opportunity. Plus it allowed me to experiment with new layouts and color-schemes, which was fun!

The Fools Who Follow didn't attract much interest, I think it was simply buried in the huge pile of Jam entries, although I was also new to itch.io and didn't have an established customer base there. But I really liked the one-page format, so I decided to try another -- Goblin Gangsters, a prequel to The Gobfather. This received much more attention, along with some good feedback. Someone said they'd had difficulty coming up with ideas for the adventure generator, so after some further consideration, I added an optional second page with examples (technically this turned it into a two-page RPG, but as you only need the first page to play, and "two-page RPGs" aren't really a thing, I still refer to it as a one-page RPG). This proved popular, not only did it provide the reader with some good examples for the adventure generator, but it also added flavor to the scenario and helped flesh it out with some interesting people, places, and events.

After watching the trailer for season 2 of the Mandalorian, I decided to create Interstellar Bounty Hunters as my third micro-setting. I thought it would make a great thematic fit with my Galactic Countdown Deck as well, but I didn't want to add card-based mechanics to the rules, so after some deliberation, I added an oracle table to the second page (with similar symbols to those used on my Countdown Decks).

Not long after, DriveThruRPG put a call out for entries in their yearly Trick-or-Treat promotion, looking for Halloween-themed products ideally 1-3 pages in length. I figured this would be a great way to promote my products and draw more attention to my work, so I created my fourth micro-setting, Samhain Slaughter. Although it wasn't chosen for the Trick-or-Treat promotion, it received positive feedback, and helped cement the style I want to use going forward.

After that, I went back to Goblin Gangsters and added an oracle table to its second page, then added a second page to The Fools Who Follow, giving all four micro-settings a consistent style. The first page is split into four main sections -- an introduction to the scenario, character creation, game rules (covering challenges, karma, and resolve), and gameplay (an adventure generator, and guidelines for running and playing the game). The second page contains examples for the adventure generator table entries, and an oracle table for adding twists to the story.

When Manuel Sambs released his fantastic Sprawlrunners toolkit for Savage Worlds, he also inspired me to create Chrome Shells & Neon Streets as my fifth micro-setting, this time tackling the cyberpunk genre.

Why use Tricube Tales?

The one-page RPGs are designed to be standalone games, but they also double up as micro-settings for Tricube Tales, and I've noticed a bump in sales for the core rules each time I release another one-pager. However, I think the system itself also works very well in the smaller format. The mechanics are a little more complex than many one-page RPGs, but they hit the sweet spot for me.

Players roll 1-3 dice based on their character, against a target number of 4-6 based on the situation, so there are two sliders for controlling the difficulty (one at the player end, the other at the GM end). Then there are perks and quirks, which give the player a way to influence the rolls -- this is something I consider important in a system, because it adds a little tactical depth, giving the players some degree of control over the rolls depending on how important they consider the situation, rather than leaving the outcome completely to chance.

There's a lot of different setting ideas I'd like to try at some point, and absolutely no way I would ever have enough time to create even a fraction of them as full settings. But these one-pagers are relatively quick to create.

When I started working on Saga of the Goblin Horde, I released a new character archetype every month, as well as various One Sheet adventures, and I think this really helped keep the spotlight on the setting. I feel the same approach could work for Tricube Tales micro-settings, and I've already got several ideas I'd like to explore! Because they're pretty fast to write, I also have a lot more freedom to experiment with weird niche settings -- and also explore outside of my comfort zone, without worrying about getting burned out before I finish.

I think the oracle table could also provide a valuable tool for solo play, and this is something I'd like to look at in more depth in the future. My earlier Blood & Bile game was explicitly designed with GMless play in mind, and I think Tricube Tales would also make a good fit for solo gaming, so a solo one-page RPG using Tricube Tales is definitely something I feel is worth exploring.

Posted by Richard Woolcock at 02:37