Back to the Roots: One Sheet 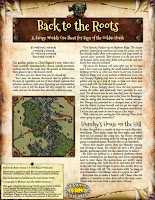 Last month GGstudio invited me to Modena Play, for my first ever gaming convention, and I was asked to run a couple of Saga of the Goblin Horde games!

I wanted to run a new adventure, but didn’t have time to create something from scratch, so I combined my favorite elements from three different adventures—the ornithopter run scene from Can of Wyrms, the war horseradishes from Root of the Problem, and the ambush cards from Dungeon Squat (the first Plot Point Episode in the setting book).

I was able to run the adventure for Giuseppe Rotondo, James Horton and Riccardo Giannico at the convention, and it was well received, so with some effort (and a few adjustments) I’ve just about managed to squeeze it into a new One Sheet!

Get it here: Back to the Roots

Posted by Richard Woolcock at 13:52

Email ThisBlogThis!Share to TwitterShare to FacebookShare to Pinterest
Labels: Back to the Roots, Modena Play, One Sheet, Savage Worlds