Persuasion is Not Mind Control 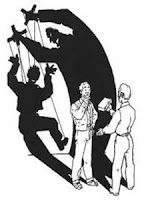 One of the skills in Savage Worlds that often seems to cause confusion is Persuasion, and it's not uncommon to read stories about players who mistakenly view it as "mind control". While Persuasion is certainly a very broad skill, it also has many limitations, so I think it's worth exploring exactly what it can and cannot do.

The following guidelines have been condensed to keep this post concise. I strongly recommend clicking each of the [Reference] links to see Clint Black's original posts in full and in context:
Changing Attitudes, Not Goals

"You're a funny guy Sully, I like you. That's why I'm going to kill you last."
-- John Matrix, Commando

One of the key points from the above list that Persuasion only changes attitudes not goals. A friendly robber may be polite and gentle with you, and might even let you keep your wedding ring, but they're still going to take your wallet. And that professional hitman who's been hired to kill you? Well, you might convince him to make your death quick, painless and dignified, but he's still going to kill you.

Of course most people have more than one goal in life, and the GM can use this reasoning to give themselves some wiggle room. A government official might be particularly greedy or vain, for example, and be highly susceptible to bribery or flattery - and a good Streetwise or Investigation roll could reveal that weakness to the players.

But the important thing is that it's entirely at the GM's discretion, and not an automatic benefit of the skill.

Players can get exceptionally high Persuasion by taking the various Charisma Edges, and this will make their characters likable and convincing (particularly for Social Conflicts), but it doesn't let them control the actions of others. If a player wants to be that convincing, have them take Arcane Background with the Puppet power, and a trapping of "silver-tongued devil".

Posted by Richard Woolcock at 04:35