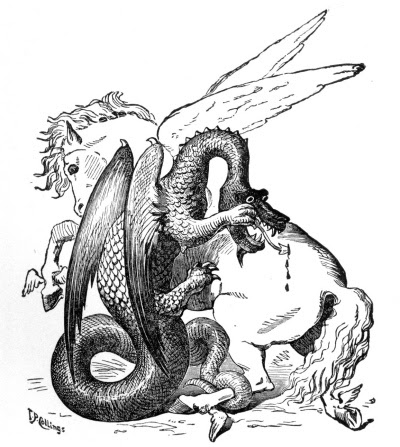 A question that comes up quite often from those new to Savage Worlds is how to handle boss fights, particularly solo foes. This isn't as simple as it sounds, as combat in Savage Worlds can be brutally fast, and when the party faces a single opponent the enemy is likely to go down before it can take more than one or two actions of its own.

If the boss has henchmen, then the "Fanatics" Setting Rule in SWD can help them survive longer, but sometimes it really makes sense thematically for the boss to be on their own.

An alternative approach is to make the entire encounter more abstract, perhaps using the Mass Battle or Dramatic Task rules for fighting a towering giant, or the Chase rules for a running battle across the rooftops against a master assassin - you could even adapt the Social Conflict rules for a personal duel. This sort of approach can work well, and I've used it myself from time to time, but once again it doesn't always fit every situation; sometimes the players just want to get down and dirty with the enemy they've been hunting for the last few sessions, and are itching for the chance to dish out a good old-fashioned smackdown using all of their cool Edges and other abilities.

Beefing Up the Bad Guy

Some GMs try to make bosses more challenging by heavily boosting their Parry and Toughness, but this is usually a bad idea, as it really just causes the players to fail more often. Flat-out failure of the "you achieve nothing" variety is rarely fun, and the players may become frustrated if they feel ineffective.

A better solution is to give the boss Edges like (Improved) Nerves of Steel, (Improved) Counterattack and (Improved) First Strike, as this will allow them to put up more of a fight without undermining the efforts of the players.

It's also important to remember that monsters aren't built using the same rules as PCs. You can give the boss any abilities you like, and make up new abilities as needed. As an example, consider the following take on a classic monster:

❄Eye Tyrant
The Eye Tyrant is a massive fleshy eyeball with a mouth full of sharp fangs and a crown of eyestalks.
Attributes: Agility d8, Smarts d10, Spirit d8, Strength d6, Vigor d12
Skills: Fighting d8, Intimidation d12, Notice d12, Shooting d8
Pace: 1; Parry: 6; Toughness: 14 (4)
Edges: Level Headed, Marksman, Strong Willed
Special Abilities
• Armor +4: Tough skin; a Called Shot at -2 can bypass the natural armor by striking the central eye.
• Bite: Str+d6.
• Anti-Magic Eye: At the end of the creature's movement for the round, it may place a Cone Template to indicate where its anti-magic eye is looking. This automatically dispels and prevents any magic from being used within the cone, including the creature's own eye rays.
• Eye Rays: Shooting; range 12/24/48; RoF 5; Each victim can be targeted by a maximum of two rays per attack. After making the attack roll, choose one of the Eye Ray abilities for each successful hit. Only Eye Ray (Damage) can be chosen more than once per attack.
• Barrage: The creature draws two initiative cards due to Level Headed, and acts normally on the higher card. However it can also use the lower initiative card to make a second attack with its Eye Rays as long as it isn't Shaken.
• Darkvision: No vision penalties for darkness (range 12").
• Flight: Flying Pace of 4" and Climb 0.
• Hardy: A second Shaken result doesn't become a wound.
• Immunity: The Eye Tyrant is able to look in all directions at once, rendering it immune to Gang Up bonuses.
• Size +2: Increases Toughness by +2.
• Eye Ray (Sleep): The victim must make a Spirit roll (at -2 on a raise) or fall asleep (and prone). They can be woken by an adjacent character as a normal action.
• Eye Ray (Slow): The victim must make a Spirit roll (at -2 on a raise) otherwise they can no longer move as a free action for the remainder of the scene.
• Eye Ray (Charm): The victim must make a Spirit roll (at -2 on a raise) otherwise they consider the creature a friend, and will attempt to help it (although this doesn't cause them to turn on their allies except as a last resort).
• Eye Ray (Fear): The victim must make a Fear check (at -2 on a raise).
• Eye Ray (Telekinesis): The victim must make a Spirit roll (at -2 on a raise) or be moved 2d6" in a direction of the creature's choice. If this causes the victim to be bashed into a solid object, they suffer the creature's Spirit+d6 as damage.
• Eye Ray (Damage): The victim suffers 2d8 damage. If the victim is incapacitated by the damage, the creature can choose to disintegrate or petrify them instead (but only a maximum of one of each per attack).

Rather than increasing its Parry, I've given the Eye Tyrant immunity to Gang Up. This prevents it from being overwhelmed by multiple attackers, without making it untouchable when facing a single foe.

Although the Eye Tyrant has a high Toughness, weaker attackers have the option of aiming for the central eye to bypass the natural armor, reducing the effective Toughness to 10. An average human with Strength d6 armed with a (Str+d6) sword would inflict an average of 8.4 damage on a successful attack, but with Wild Attack he'd receive +2 to hit (cancelling out the penalty for the Called Shot) and inflict +2 damage, giving him an average of 10.4 damage against Toughness 10. That's a very reasonable chance of causing Shaken.

On the other hand, the Eye Tyrant also has Hardy - so while it's not too hard to make the creature Shaken, it would have at least some degree of protection from multiple attackers piling up weaker blows; it's going to require a raise on the damage roll to cause the Eye Tyrant a wound.

When it comes to offensive abilities, the Eye Tyrant has a high rate-of-fire ranged attack that can target multiple foes (but cannot be focused exclusively on one attacker), as well as a special Barrage ability that allows a second set of attacks later on the same turn. The Anti-Magic Eye also adds a tactical option against spellcasters.

Although the Eye Tyrant can effectively shoot 10 eye rays per round, these are split into two RoF 5 attack actions, each of which can be rolled as a dice pool. The mechanics of the eye rays have also been streamlined to make the action resolution very fast, as there are effectively just two types of attack: 2d8 damage, or resist with a Spirit roll at -2 (the specific effect of the latter can be determined randomly if the ray hits and target fails to resist).

Although I've not played it myself, one of the more interesting concepts I've read about in D&D 5E is that of boss encounters. In particular, the idea that bosses can take additional actions during the round, after players have taken their turns, so that they continue to do things throughout the entire round rather having all their actions clumped together.

This is a roughly similar concept to what I was originally aiming for with my Eye Tyrant with its Barrage ability, but having the boss take a bonus action after each player is easier to track, ensures that their actions really are spread out throughout the turn, and allows the boss to scale with the size of the party.

But how could this concept be applied to Savage Worlds? Here's how I'd do it.

Bosses are always Wild Card NPCs, and there should never be more than one boss in any one encounter. Boss statblocks always list one or more abilities as being "boss actions", and the boss can perform one of these actions immediately after each player has completed their own turn. It is not possible to perform the same boss action more than once per turn unless that ability explicitly states otherwise (this makes it easy to track used boss actions each turn by preparing one card for each option, placing the cards face up on the table as each ability is used).

Here are some examples of the sort of things that might be classified as boss actions:
In addition, each boss could have one or two special passive abilities such as:
Examples

Here are a few examples of the sort of boss abilities certain monsters might have:

Posted by Richard Woolcock at 02:28