Codex Infernus: The Savage Guide to Hell is now very close to completion, and I'm proud to have been involved in the project, even though my contributions were really quite small. The book looks great, with some amazing artwork, and it's packed full of valuable content about hell and its denizens.

My involvement was primarily technical editing (reviewing mechanics and statblocks), however I also wrote 4000 words of new content - a revised corruption system (including two Hindrances), the angel race (including six racial Edges and the "Fallen" Hindrance), and expanded rules for the Faith skill. The Faith rules also include trappings for seven types of angelic weapon (based on choirs of angels) along with their seven demonic counterparts (based on Binsfeld's classification, where each demon is associated with one of the Seven Deadly Sins).

The demonic/angelic weapon rules were actually my second attempt, as my first proposal wasn't a good fit with the publisher's needs. But as the two versions are significantly different to each other, I thought it might be fun to turn the original idea into a small fan supplement, which I've called "Eldritch Weapons". I've adjusted the theme slightly (giving it less emphasis on the infernal, and more of a Lovecraftian feel); while it can certainly be used with Codex Infernus, it would also fit many other fantasy or horror settings. 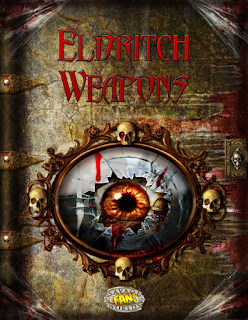 This free fan supplement (around 3200 words) offers a concise set of guidelines for creating relic weapons. It provides a list of thirteen different trappings for each of the five characteristics (Boon, Geas, Nature, Legend, and Destiny), and the abilities of the relic are determined by drawing five cards and then cross-referencing them on a table. Drawing two, three, or four cards of the same rank will also increase the overall power of the relic. 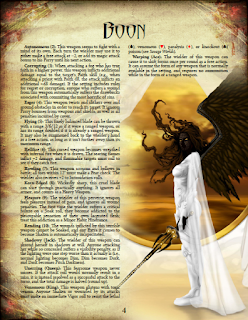 It should be noted that these relics are designed to be powerful, similar to the true relics in the Fantasy Companion. Think of Stormbringer, or the One Ring, or the Lament Configuration. Eldritch weapons are not mere trinkets to hand out at random during an adventure; a single relic might provide the central focus of an entire campaign.

This opportunity also allowed me to practice my layout and presentation skills, which I've discussed in a previous blog post. In particular, I've become very enamored of the style used by Pinnacle in East Texas University, where the artwork fades smoothly into the text, and I wanted to see if I could do something similar.

Mythology is rife with facinating magical weapons, but one of my personal favourites is Tyrfing. Forged by two dwarven smiths of Norse mythology, this gleaming sword would never miss a stroke, never rust, and could cut through stone and iron as easily as through clothes. However it was also cursed to kill a man every time it was drawn, to be the cause of three great evils, and to eventually kill its wielder.

Tyrfing could be created with Eldritch Weapons as follows:

The combination of cards would give Tyrfing a +2 bonus to attack and damage rolls.

I'm rather pleased with the way Eldritch Weapons turned out, and I'm glad I didn't just scrap it, as I think it makes a nice little supplement. I hope you enjoy it as well, and find a use for it in your own games! If you have strong opinions on it (either positive or negative) please let me know in the comments - I don't get much feedback on most of my fan supplements, so it's often difficult for me to judge what people find useful (and would like to see more of).

And of course, don't forget to keep an eye out for the upcoming release of Codex Infernus!
Posted by Richard Woolcock at 11:41