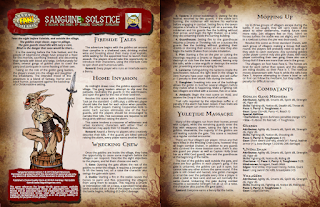 
I had originally planned to release some archetypes to go with the adventure, but they proved to be a lot more work than expected, and I don't think I can finish them before Christmas. However you could easily use the characters (and goblin race) I wrote for We Be Savage Goblins for now.
Posted by Richard Woolcock at 14:23