Savage Con: What a Ride!

At the weekend, I had the opportunity to attend Savage Con, the UK's only Savage Worlds convention. It was a pure gaming event, with three time slots on Saturday and two on Sunday, and three different games for each time slot. All of the games looked good, so I had to pick carefully. 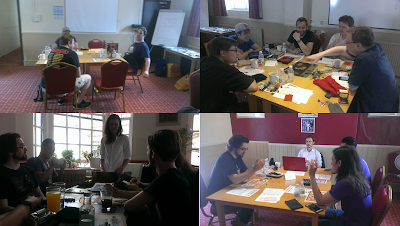 I drove up to Redhill with an old friend of mine (Steve), and as he didn't have much experience with Savage Worlds (or know most of the settings), he decided to sign up to the same games as me. Unfortunately I came down with a rotten cold just before the con, and lost my voice, but I gave it my best shot! Here's a quick breakdown of the games I attended.

Owen Lean is a Savage Worlds freelancer who has worked on a number of different projects. While I never really got into Deadlands, I've heard a lot of good things about this particular One Sheet (which he wrote for Pinnacle), so I jumped at the opportunity to join his game.

We had an absolute blast! Owen provided a selection of pregenerated characters with strong ties to each other and the adventure (he really should release these for other people, they're a perfect fit for The Taxidermists Tale!), and the players worked well together as a team.

While Owen has a natural knack for GMing and improvisation, and obviously knew the adventure inside out, I think we still managed to give him one or two surprises! But he just rolled with it, and kept the Bennies flowing, even when I shot the Big Bad for 6 wounds!

Game 2: Punted in the Bonce

Think "Lock, Stock and Two Smoking Barrels" meets "Only Fools and Horses". This adventure was written by Alexis Hunt, but it was run by Nikk Lambley (both are hosts on the TTT Podcast), and he did an amazing job.

Steve said this was his favorite game at the con, because he understood the setting, and knew what sort of things he could do. I think this was probably my favorite as well, by a narrow margin—although all of the GMs were top-notch, and I'd be very hard pressed to choose a favorite, the party dynamic we had in this particular game was a perfect fit for the scenario.

There were five players, with nobody dominating the group or taking a backseat role, and we were able to reach a reasonably quick consensus on how to execute our heist (and because it was a sandbox game, it really was entirely our own plan). Nikk is really good at doing different NPC voices, and he reacted to our plans without trying to lead us in any particular direction. I think his GMing style would be a perfect fit for a more freeform game like Blades in the Dark.

Another humorous game, this one co-written by Alexis Hunt and Eric Lamoureux, and run by James Clarke (who is also a host on the TTT Podcast). The PCs are aliens attempting to kidnap a pageant winner from a small redneck town, as they need her DNA to save their planet.

James did a fantastic job of GMing—his NPC voices and impressions were hilarious, and the adventure had all sorts of twists and turns, with some very memorable scenes (such as riding on a lawn mower with a zombie, and licking a corpse during a funeral). James also created some really cool thematic props, and added a truly disgusting conclusion to the adventure.

I really enjoyed the game, but with just two players (Steve and I) it didn't have quite the same group dynamic as the earlier games. With one or two more players, it would have been perfect.

Game 1: Saga of the Goblin Horde

On Sunday morning I ran Saga of the Goblin Horde for Alexis, Nikk, James, Pete and Steve. In retrospect I should have insisted that the louder players sit at the back of the table, so I apologise to Pete for not always responding, but I hope everyone had fun.

Most of my One Sheets take me around 2-3 hours to run, depending on the size of the group, and this time I had a 4 hour time slot. So I decided to prepare three adventures, and just squash them down as needed on the day, depending on how much time I had left. The adventures were connected to each other, and I will release them as a three-part mini PPC when I get the chance to write them up properly.

The first adventure drew inspiration from heist movies such as The Italian Job and The Bank Job, except it involved stealing a Hand of Glory rather than money, so I called it "The Hand Job". The second adventure was called "Hole of Glory", and involved using the Hand of Glory to gain entrance to an underground lair. The third adventure, "Mourning Wood", was a treasure hunt in a haunted forest.

Although I backed the Lankhmar Kickstarter, I never read the original novels, so to me it's just another fantasy setting. I mainly signed up because I wanted to be in one of Alexis's games—and he certainly didn't disappoint!

The adventure involved tracking down and capturing a man named Bob the Slob, who had apparently ripped off the thieves guild. In theory a simple job, but of course it ended up being far from simple to execute, and as you can probably imagine (with Alexis as the GM) we got up to all sorts of shenanigans—from the rake who seduced seven women at the same time, to the toilet grappling scene, to the brutal rooftop chase, all supported by Alexis's funny NPC voices.

At the conclusion of the adventure we turned the tables on our employer, and managed to trick the thieves guild out of a huge sum of money. But of course Alexis couldn't leave it at that, so he told us that several months later we were assassinated in our sleep, after the guild discovered what we'd done :P

Steve and I had an awesome time, and really appreciated all the effort that went into the organization and planning of the event. I've been running and playing Savage Worlds since 2010, but this was the first time I've had the chance to play (as opposed to GM) a face-to-face game in English.
Posted by Richard Woolcock at 05:09