Based on an excellent suggestion from +Eric Simon of Four-in-Hand Games, I've recently been reading the Non-Designer's Design Book by Robin Williams (no, not that Robin Williams). It contains a lot of great advice, but one thing I've found particularly enlightening is the "C.R.A.P." principle, which stands for Contrast, Repetition, Alignment and Proximity. This principle is discussed in many places online, but in short it works like this:

Now that I have a new cover for Saga of the Goblin Horde, I'd like to update my earlier releases to use the same style, so I figured this might be a good opportunity to apply what I've learned so far. I've obviously still got a lot to learn, but I've always learned better through practice, so I decided to have a play around.

Rather than just update the archetypes supplement, I thought it might be worth turning it into a free primer - it would still contain the archetypes, but would also include an overview of the setting and a sneak preview of some of the new mechanics. But this raised the question of what I should use for the cover. I don't want to use the same cover as the setting book, but neither do I want to commission a second cover. I considered using the front cover with a different goblin illustration, but it would be extremely difficult to find any existing art that matched the same style, and the two covers would still end up having a bit of a "samey" look that I wanted to avoid.

So after some consideration I decided to use the back cover (which I probably wouldn't include in the PDF anyway), and I'm thinking of doing something like the mock-up on the right.

The title font is the same one I've used in my other releases - "Mountain's of Christmas", which is free for commercial use, and I think captures the slightly comical feel I'm aiming for (when I discuss the setting with non-roleplayers, I describe it as "Gremlins meets Lord of the Rings").

Following the rule of contrast from the CRAP principle, the "Sneak Peek-a-boo" text has a completely different color and font to "Saga of the Goblin Horde", although both text elements are placed close together (proximity), and are aligned with each other as well as the logo (alignment).

The placement of the goblin's head also uses the Rule of Thirds as best I could manage, with the eye placed along the bottom grid line. Because of the position of the rip in the center of the page, it's not possible to align the eye with a grid intersection point, but at least it's on a grid line.

The "Sneak Peek-a-boo" text is also aligned with the goblin's eye, and is an amalgamation of "Sneak Peek" and "Peek-a-boo" (which is also why the "Peek-a-boo" is split over two lines) - this is typical of the sort of wordplay I use in Saga of the Goblin Horde.

The goblin's face is also facing slightly towards the text. The intent is that the eye is the first thing to catch the viewer's attention, and that directs them towards the "Sneak Peek-a-boo" text.

Normally I would have placed the "Saga of the Goblin Horde" on the left, but one thing the Non-Designer's Design Book discusses is that you shouldn't be afraid of empty space. It would also be difficult to align it with the "Sneak Peek-a-boo" text horizontally.

I decided it would also make sense to update my One Sheets to the new style, and I wanted to apply some improvements to the typography, which is another subject I've been reading up on, and which +Marcelo Paschoalin has also been giving me some advice about. 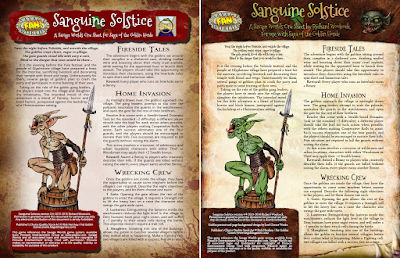 Now that I've got a custom cover and interior page design for Saga of the Goblin Horde, I thought it would make sense to redesign my One Sheets in the same style - not only to make them consistent with the setting, but also to correct some typography mistakes I've been making.

As you can see from the about comparison, I've changed to the new paper design, updated the banner to use the same texture as the cover, given it a more subtle drop shadow, added the goblin head as a logo, and redone the title to match the cover.

The goblin illustration by the talented +Rick Hershey has been recolored (because the goblins in Saga of the Goblin Horde are always green), the body font has been changed to Crimson (which I prefer to the previous Open Sans), and the subheadings now use the narrower Booter Zero Zero font, rather than Booter Five Zero.

I've also made a few corrections to the typography (you can compare the numbers with the screenshot on the right):
Note: Although you can't see it on these screenshots, I've also started using a custom "goblin head" Wild Card symbol for the NPCs; personally I think all settings should have their own special Wild Card symbol :)

No doubt I'm still making plenty of mistakes, and it wouldn't surprise me if I go back and redo all of this a few months from now, but the important thing is that I'm learning and improving. I personally feel that the quality of my supplements has noticeably improved over the last year, and I hope to keep improving them in the future.

If nothing else, I've certainly gained a hefty appreciation for the hard work of professional layout designers!

Posted by Richard Woolcock at 04:16