Saga of the Goblin Horde: Past, Present and Future 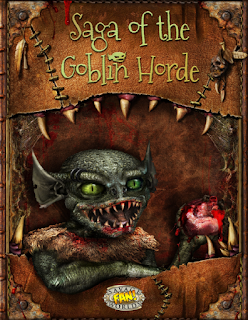 Last month I applied to Pinnacle for a publication license, and while I await their response I thought it might be interesting to look back over the path I took, give an overview of the current state of the project, and consider where I might go from here.

While Saga of the Goblin Horde isn't the only thing I've worked on this year, it was still the indirect goal of most of my efforts.

The freelance work I did for Melior Via, Sneak Attack Press, Gun Metal Games and Just Insert Imagination was primarily motivated by my desire to gain valuable experience and references, improve my networking, and fund the artwork I needed for my setting.

The new and revised fan supplements I released, such as Savage Frost Giants, Eldritch Weapons, Savage Undead and Savage Dragons, were all created in different visual styles. That's not a coincidence; I was experimenting and practicing my layout skills, and trying to come up with a style I liked for Saga of the Goblin Horde.

The goblin archetypes and the three SotGH One Sheets I released were designed to promote the setting, and see what sort of interest there was in a goblin campaign, while the two Drakonheim One Sheets I wrote allowed me to experiment with different styles of adventure (the first of which was very nearly system-neutral, for reasons that will become clear at the end of this post).

And finally of course, my extensive blog posts on setting design were all part of my research into what I would need to do in order to produce a quality product. 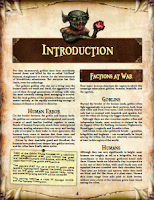 Here's a breakdown of the sections I've been working on, compared with my original guidelines.

This section is now complete, with 1619 words (3 pages) - while that's at the lower end of my goal, it's still within the target range. 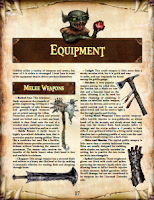 Currently I have 1607 words, although half of that is still in the working document, and needs to be copied into Scribus. I also need to create the equipment tables (melee weapons, ranged weapons, and armor). So far I have 2 pages, but the final chapter will probably be 5 pages.

This section is smaller than expected, at 480 words (1 page), but it covers the 3 new setting rules pretty clearly, so I see no reason to expand it further.

My guidelines suggested anything from 0 to 10000 words, depending on the setting.

In fact I expect this section to eventually be around 1000-1500 words (3 pages), but at the moment I only have rough notes on the different deities. 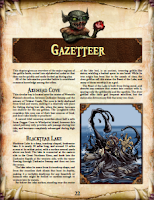 My original guidelines suggested 15000-25000 words of setting information, but as I pointed out in my previous blog post, there is some precedent for having a smaller gazetteer - in particular, 50 Fathoms has a 4 page gazetteer (around 2100 words), with the other information moved into the GM section or the adventures.

I'm using a similar solution, and aim to have around 2000-2500 words. Currently I have 1350 words (3 pages), with the first page already finalized and the others still needing to be fleshed out. I expect the final chapter to be 5 pages, including the full-page map I've commissioned from Eli Kurtz (of Mythic Gazetteer).

My original guidelines didn't specify a word count for this chapter, as it basically contains content from any of the earlier chapters that shouldn't be read by the players.

I've currently got 1076 words (2 pages), and will probably add another 500 words, bringing the total up to around 3 pages.

My guidelines propose 3000-6000 words based on Pinnacle's newer setting books, however they usually release the Plot Point Campaign as an entirely separate book, while I plan to put everything in one book (like the older setting books, where the PPC usually filled around half the book).

So far I've got a 277 word outline for the PPC, and a 594 word adventure generator, but other than that I only have loose notes on the individual Plot Point Episodes and Savage Tales. I expect this chapter to be at least 30 pages, and possibly as high as 50 pages, depending on how many adventures I decide to include in the book (as opposed to releasing separately as One Sheets). 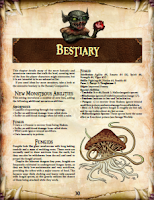 The goal was 5000-10000 words, although I consider this a pretty loose goal, as Saga of the Goblin Horde also references the Fantasy Companion (which has an extensive bestiary).

Currently I have 697 words (2 pages), which I threw together for the sample, but I have the artwork and notes for quite a few more besties. My online Monster Finder already contains over 3000 monsters, so this chapter won't be difficult, it's just a matter of deciding which creatures are appropriate to the setting.

I expect this section to be around 10 pages, as I want to have a good variety of foes, but I don't want to go overboard. However I could easily see it growing to 15 or even 20 pages, so we'll have to see.

The final book should be around 70-100 pages, plus the cover, credits, table of contents, and the "Keep Out" warning page before the GM section.

The vast majority of my effort up until now has been on the player section, which only requires another 5 pages of writing and a little more layout work (and final proofreading) before it's finished. By far the biggest part that's still outstanding is the adventures.

Saga of the Goblin Horde now stands at a crossroads. If it becomes a licensed setting then I will complete the remaining sections, release a free primer (with an introduction, setting rules, and the archetypes), then continue to support the setting with occasional free One Sheet releases.

Should my application be rejected, I've already invested far too much time and money to simply give up, so there are three different backup plans I'm considering:

1. Look for another roleplaying system, or even write my own (I've created several over the last 30 years), however this would mean discarding the experience and reputation I've built up over the last 6 years in the Savage Worlds community, which would be a shame. I'd also have to build up a target audience from scratch if I wrote my own system.

2. Complete the player section and release it as a free 30-page "Player's Guide" under the fan license. The GM's secrets and the adventures would then be expanded and turned into a system-neutral product (along similar lines to Drakonheim: City of Bones) and sold on DTRPG. The bestiary would need to be another fan supplement, though, as it contains statblocks.

3. Try to reach some sort of business arrangement with an existing licensee, whereby they allow me to publish through them in exchange for a cut of the profits. This is where my freelancing experience will come in useful; I'm already the sole author of several licensee products (in one case I even handled the artwork and layout as well, literally handing a completed PDF to the licensee to put up for sale), so I should be in a fairly good negotiating position.

Regardless of the outcome, it promises to be an interesting journey ahead!

Posted by Richard Woolcock at 05:55