An Axe to Grind: Christmas One Sheet

Here comes a chopper to chop off your head!
Chip, chop, chip, chop,
the last goblin is dead! 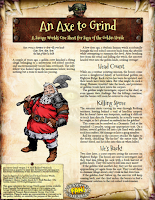 A couple of years ago, a goblin crew hijacked a flying sleigh belonging to a mysterious red-robed sorcerer, and unceremoniously tossed him overboard. The jolly fellow was dashed upon the mountains below, leaving nothing but a stain to mark his passing.

A few days ago, a dyslexic human witch accidentally brought the red-robed sorcerer back from the afterlife while attempting to summon the devil. After breaking free from the ritual and killing the witch, the sorcerer headed west into the goblin lands, seeking revenge!

Every year, I release a new Christmas-themed One Sheet for Saga of the Goblin Horde – Sanguine Solstice in 2015, Sleigh Heist in 2016 and Season's Beatings in 2017. Here is the adventure for 2018:

Get it here: An Axe to Grind

This One Sheet is a direct sequel to Sleigh Heist and Season's Beatings, although it can also be run as a standalone adventure. The Configurable Map has also been updated.

Posted by Richard Woolcock at 15:53 No comments: