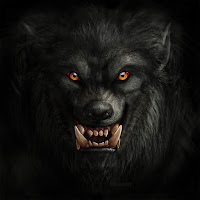 This isn't a new rule, but rather an example of how the existing rules in Tricube Tales can be applied to supernatural afflictions.

Note: There is now a Discord server for my roleplaying games. Please feel free to drop by if you're interested!

When a PC runs out of resolve in Tricube Tales, they receive an affliction. If that affliction was caused by the infectious bite or claw attack of a supernatural creature, then the GM may wish to give the character an appropriate supernatural affliction, such as "vampirism," "lycanthropy," "zombie virus," etc.

Afflictions work in the same way as quirks, except the GM decides when to activate them (including introducing complications to the scene). In this way, a PC who has been afflicted with lycanthropy would have no control over their transformations or the carnage they cause -- but (as always) advancement would allow them to later convert the affliction into a quirk, representing the character learning to control their condition.

Likewise, the affliction would initially provide no mechanical benefits, but the PC could later take supernatural perks such as "preternatural strength", "rending claws", etc. If the PC chooses a broad perk that encompasses a range of abilities, they should also take a suitable limitation (much like the Magic Limitations) -- for example, "werewolf gifts" might only work if the character first spends time transforming into their wolfman form, while "vampiric gifts" might only work at night, and so on.

Of course, not everyone will wish to embrace their new condition, and some may actively seek to undo it.

If the affliction isn't permanent, the GM might offer the player a story-based way to remove it -- perhaps they can reverse their condition by killing the vampire who bit them, or seek a cure for the zombie virus. In theory, a permanent affliction can also be removed, but this requires the permanent expenditure of karma using a relevant perk (probably something magical, or based on cutting-edge medical research).

Finally, if a character receives the affliction just as they're about to advance, the GM might offer them the more drastic option of converting their "zombie virus" affliction into an "amputated arm" quirk, or something similar!

Sometimes an affliction may not have any benefits at all. While some novels and TV shows depict supernatural creatures as sentient beings with powerful abilities, others treat them as mindless monsters driven purely by instinct, hunger, and rage. In such cases, infection effectively becomes a death sentence, rendering the PC unplayable -- and just like any other fatal affliction, the GM should always make the risk clear in advance.

However, the infection could also represent a slow decline rather than an instant transformation, with the victim of a zombie bite surviving hours or even days before eventually succumbing to the virus. The GM could even treat it as a multi-stage infection, with future afflictions worsening the character's condition as they gradually transform.

Tricube Tales is a simple system by design, and it should be able to handle most settings and genres without the need for additional mechanics. This holds true for supernatural afflictions as well -- you don't need to add any new rules, just interpret the existing ones in the context of a supernatural setting.
Posted by Richard Woolcock at 06:46 No comments: