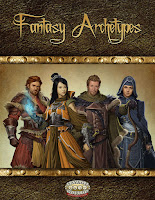 I've been incredibly busy with real life stuff lately, but I finally had the chance to finish my first product for the Savage Worlds Adventurer's Guild (SWAG), and I uploaded it last night.

I'm still getting up to speed with the new edition of the rules (SWADE), so I tried to keep my first product fairly simple. I also wanted it to be both versatile and polished so that it would appeal to a wider audience, and give a good first impression.

The PDF contains eight pre-generated characters based on "traditional" fantasy concepts (warrior, mage, cleric, rogue, ranger, paladin, druid and necromancer), complete with background story and Interlude suggestions (much like my SotGH archetypes). The characters are designed to be easily adaptable to a range of different settings, so they're built with just the core rules, and refer to places and people in general terms (a coastal city, an influential nobleman, etc) rather than by specific names.

But as is often the case with my products, there are also some special features...

Something I often noticed when running SotGH was that some people have a very strong preference for playing characters of a specific gender. In some cases, they will use this to select an initial shortlist, which can seriously limit their choice of available characters.

So I decided to try something a bit different with the Fantasy Archetypes, and gave each character both a male and a female version. The idea is you can print the PDF double-sided, and players can choose their character based entirely on the concept, then just flip the character sheet over to the appropriate side.

A while ago I saw a set of archetypes from Pinnacle where you could use layers to choose between Novice and Seasoned versions. I thought it was a great idea, so when I updated Savage Dragons I did the same thing (except I also added Veteran). I didn't think more about it until recently when someone asked if there were any Seasoned versions of the SotGH archetypes.

So for the Fantasy Archetypes, I decided to take the concept a step further: You can choose between Novice, Seasoned, Veteran, Heroic and Legendary. In case anyone hasn't realized yet, this was also one of the main reasons I decided to create my SWADE statblock analyzer! 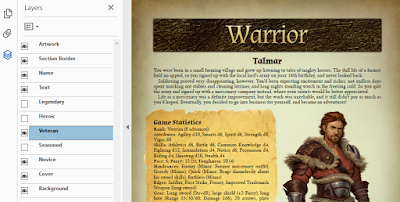 Of course, I also use layers for other things, so people can switch off the background before printing, or remove the character names (if they'd rather let players come up with their own). But the big selling point here is that there are literally five different versions of each character.

Pinnacle often include a page of tri-fold figure flats at the end of their Archetype PDFs. It's something I didn't consider for SotGH, but several people have asked about them in the past, and I will certainly add them when I update them to SWADE. But for the Fantasy Archetypes, I decided to include a full page of figure flats, and I think they look really good. Forrest Imel (the artist) did a fantastic job with the character illustrations.
Posted by Richard Woolcock at 01:40 3 comments: