Gray Matter: One Sheet for Drakonheim 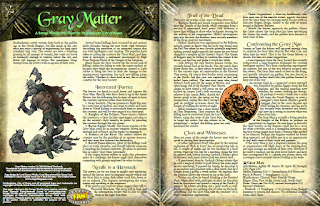 Last month I discussed how to go about designing a Plot Point Campaign based on a roleplaying setting, and used a fictitious Drakonheim Plot Point Campaign as an example. My blog post was even mentioned by Ron, Kristian and Clint on Simply Savage: Episode 006 – You Down with PPC? (Yeah, You Know Me), which was quite an honor!

The Kickstarter for the upcoming Savage Worlds Drakonheim Companion is rapidly approaching (you can sign up for notifications about it here), so this week I decided it might be fun to turn the first episode of my fictitious Plot Point Campaign into a Savage Worlds One Sheet.

The title of the One Sheet has a double meaning: the antagonist is believed to be an intelligent undead (he uses his "gray matter"), and the adventure itself concerns a "matter" for the "Gray" Society.

This is actually my fifth One Sheet, but this time I wanted to try something a bit different.

My other One Sheets are all very linear and "crunchy", using a lot of mechanics. This approach works very well (interestingly enough, I've found such adventures can even be played without a GM!), however I wanted to practice writing other styles of adventure as well, so this time I've tried the opposite extreme; Gray Matter is very "fluffy" and deliberately vague, giving suggestions rather than specifics, so that each GM can run it differently. There are also multiple endings (a concept I first toyed with in Dark Queen's Gambit), so the players can't ruin the surprise by reading the One Sheet.

Because it's also the pilot episode in my fictitious Prophecy of Drakonheim Plot Point Campaign, I also wanted Gray Matter to serve as an introduction to the setting, so it references over a dozen major NPCs as well as various minor NPCs from the setting, along with many of the locations and political factions.

You will obviously need the Drakonheim: City of Bones setting book to run this One Sheet adventure as written.

Posted by Richard Woolcock at 00:38