Designing a Gazetteer (and a Map) 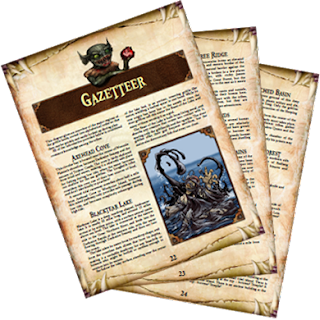 Saga of the Goblin Horde is gradually taking shape, but one of the areas I've been struggling with is the setting fluff. My original section breakdown included 15,000 to 25,000 words of setting information, but that sort of writing isn't really my forte - I'm much more of a crunch person, preferring to keep the fluff relatively short and concise.

However a couple of months ago while musing about mini settings, I noticed that the esteemed 50 Fathoms only has a 4 page gazetteer (about 2100 words) covering public knowledge, with the rest of the setting information split across the GM section and adventures. This means most of the setting is revealed during play rather than needing to be read by the players in advance, something that fits very nicely with my plans for the Plot Point Campaign.

Conceptually this approach seemed fairly straightforward to implement. My gazetteer would consist of a list of major locations sorted into alphabetical order, with one or two paragraphs of information about each location (averaging around 100 words per location). However this is where I hit my first snag: I hadn't designed the world yet!

Fortunately I didn't want an entire world, just a relatively small area where the campaign would take place, and I'd already described a number of the major geographical locations in my earlier One Sheets and archetypes. On the down side, however, I'd described those locations without really considering the bigger picture. This left me in the rather unenviable position of trying to retroactively design the geography around the content I'd already written, and the only way I could really envision the layout was with a map.

This is where I hit my second snag: I can't draw.

I tried! I read lots of tutorials about drawing maps, and I experimented with different techniques, but the results were mediocre at best (and took me ages!). So in the end I settled on using Inkarnate, a web-based cartography tool, to sketch out a prototype map. My results were still quite poor, but it was fairly quick and easy to use, and allowed me to at least visualize the world and define the major locations. 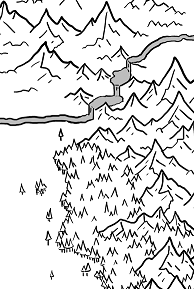 This is the point where I decided to get some expert advice. Eli Kurtz (of the Mythic Gazetteer) had recently written a post about his first commissioned map, and offered to share his expertise with me, so I picked his brain about topography, geography, demographics, and more. His advice proved invaluable, but also showed me how far out of my depth I was - so I decided to commission a map from him.

While I flesh out the gazetteer (which should be around 2000-2500 words), Eli has started working on the map. The layout of the land has already been completed, and he's now started adding detail - for example, in the small section of map to the right you can already see the Longtooth Mountains that separate the goblin territory from the human lands, Twilight Wood nestled in the shadow of the mountains, and the Great Northern River as it flows down a three step waterfall.

The final map will be in color with a hexgrid overlay (toggleable as a PDF layer), so the players can trigger specific Plot Point Episodes or Savage Tales as they move around the map (yes, the idea was inspired by 50 Fathoms!).

In retrospect, this should have been one of the first things I did, but you live and learn. Perhaps at some point I'll try my hand at drawing maps again, but for the time being I've decided to leave that to the cartography experts, while I focus on the things I'm already good at.

Posted by Richard Woolcock at 15:09