A few years ago I wrote a tool for analyzing SWD statblocks, after I got tired of proofreading them all manually. Last month I started updating it to SWADE, and took the opportunity to expand and improve the information it provides.

The tool is now pretty much finished, so I would like to thank everyone who gave feedback (particularly Jan Jetmar, who sent me lots of bug reports). There are most likely some bugs that I've missed, and the analyzer currently only supports the core rules, but it's still a very useful tool which I've already started using for my own products.

The tool is primarily designed for publishers as a proofreading aid, but may also be of interest to GMs and players. It is particularly good at analyzing player characters (including archetypes and pregens), but provides useful information about monsters and other NPCs as well. It's also very handy for updating SWD characters to SWADE, as it'll report obsolete skills and such. 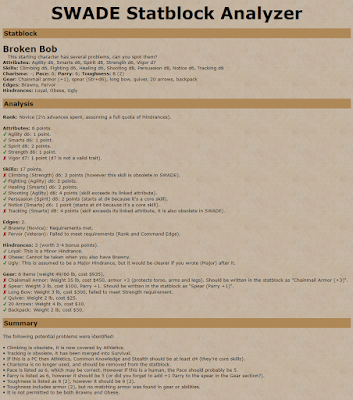 Posted by Richard Woolcock at 12:23 4 comments:

In SWADE, players can create their own skills (rather than just Knowledges like in SWD), and may use any skill they can reasonably justify for Tests and Support rolls. Dramatic Tasks and Quick Encounters also give players some leeway over which skills they use, at the GM's discretion, and the latter can be used to resolve combat and chases.

I could easily see this being used as the basis for a "Savage Worlds Lite" variant of the system, for groups who prefer Theater of the Mind style gaming. This wouldn't even require any changes to the official rules, it would just require the GM to use them in a specific way.

You could keep the core skills, but all the rest would be discarded (much like many settings drop certain skills, but taken to the extreme). Players could then make up appropriate skills to fit their character concept, and the GM could apply the Familiarization rule to water-down any overly broad skills.

The normal combat and chase rules would no longer be used -- instead, the GM would just use Quick Encounters, greatly speeding up play and removing the need for minis and battle maps. It would no longer be necessary to write down Pace or Parry, as they'd never be used during play, and technically you could even ignore Toughness (as Quick Encounters cause wounds rather than damage, and even rules like Mass Battles and Networking only cause Fatigue).

Some Edges and Hindrances would no longer have any effect if you never used the combat rules, but they could either be dropped or factored into the Quick Encounters in a more abstract way. Of course, once you've got guidelines for interpreting Edges and Hindrances in an abstract way, you could also allow players to make up their own, potentially eliminating the need for laundry lists of predefined advantages and disadvantages -- but then you're starting to move into homebrew territory.
Posted by Richard Woolcock at 02:53 9 comments: