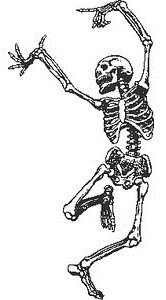 I like necromancers. I've always thought they were one of the cooler mage concepts (with serious anti-hero potential), and I love the idea of all those icky minions. I enjoyed reading Brian Lumley's Necroscope series, and Gail Z. Martin's Chronicles of the Necromancer, and of course I adored Bauchelain and Korbal Broach in Steven Erikson's Malazan Book of the Fallen. When I played Warhammer Fantasy Battle long ago, I usually used necromancer-lead undead armies (and I was gutted when the 3rd edition rules quadrupled the point cost for the rank and file undead), and in computer games I usually play a necromancer when available.

Sadly most roleplaying settings that include rules for necromancers define them exclusively as bad guys. In Shaintar, for example, necromancers are only available as NPCs. Even in the Eberron setting, where the nation of Karrnath used undead soldiers to defend its borders during the Last War, necromancy is viewed as evil.

However while some forms of necromancy could certainly be classified as evil (particularly in relation to draining, binding or corrupting souls), skeletons and zombies are typically portrayed as mindless and soulless - if you ignore the icky aspect, they're not really any different than robots.

Raising the Dead for a Living

One of the first adventures I ever ran for my current group started out rather clichéd - the PCs were passing through a settlement that was being terrorised by a local necromancer. The villagers spun a tale of murder and dark magic, of abductions and grave robbing, and begged the PCs to deal with the threat...

The truth was somewhat different. The necromancer was using animated skeletons to perform manual labour on nearby land that he'd purchased from the local lord. He hadn't killed or abducted anyone, but he'd paid several of the villagers a tidy sum in advance for the right to use their corpses after they died, and the contract was legally binding. The villagers were more than happy to take the money while they were alive, but had a change of heart when it came to upholding their end of the bargain, and many of them didn't want to hand over the dead bodies of their relatives. They figured a party of gullible and violent adventurers would be the perfect solution to their dilemma.

Thrown into the mix was an exceptionally stupid NPC paladin (I was poking fun at the D&D dump stat stereotype), who was already in the area attempting to deal with the undead "menace", and decided to join forces with the party. This lead to the following memorable exchange as the group scouted out the necromancer's base:

PC: Wait! It's a fortified building with archers on the walls and heavily barred gates, you'd need a battering ram to get in there...

Paladin: Ah, tactician eh? I like the way you think!

The paladin later died while trying to single-handedly batter down the gates with an improvised ram, but his catchphrase lived on, and for a long time afterwards any blatantly obvious suggestions would be met with "Tactician eh?"

The PCs never did kill the necromancer. He didn't drive them off with undead or dark magic, but with legal threats.

The memory of that adventure came flooding back when I read Drakonheim. In the original Drakonheim adventures, a cabal of necromancers are raising an undead army to defend their city from a hobgoblin invasion. The full setting takes place in the aftermath, with necromancers now working openly with the support of the mayor. The setting even has an overzealous paladin who keeps breaking the law by attacking the undead!

Created by +Matthew Hanson (author of the Broken Earth and Kronocalypse settings for Savage Worlds), Drakonheim is a system-neutral setting, although it expands on a trilogy of earlier adventures that he wrote for D&D Next. As a result, Drakonheim still maintains a bit of a D&D vibe, with the assumption of common D&D races, classes/archetypes, monsters and spells.

Of course this is ideal for me, as it fits perfectly with the magic system in Savage Vancian Magic, and with my Monster Finder bestiary. It would therefore take relatively little effort to convert the original three adventures, and because the Drakonheim setting book is pure fluff, it wouldn't need any conversion at all.

For those who prefer to stick with official sources, the Horror Companion would make a good source of Edges and powers for the Gray Society (the organisation of necromancers who defended Drakonheim), and the Fantasy Companion bestiary should cover most of the monsters.

Because the setting focuses on a single city, Drakonheim could also be inserted into established settings - much like Kurstwahl, the city from Guild of Shadows (and as both have pseudo-Germanic names and dark themes, I could very easily imagine using both cities in the same fantasy world).

I'm actually a very big fan of this slottable-setting approach, with detailed cities that can be dropped into existing campaigns as needed, fleshing out places that the PCs are visiting. I own far more settings than I could ever realistically run as full campaigns, but slottable locations can simply be blended into my current campaign as new places to explore.

Posted by Richard Woolcock at 04:53