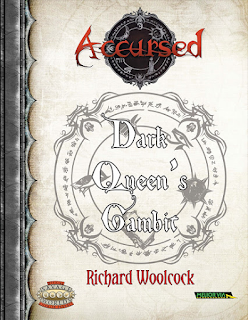 I recently had the opportunity to write a One Sheet adventure for Accursed, the dark fantasy setting by Melior Via, and today it was published on DTRPG. Although I've written a lot of Savage Worlds content over the last few years, including freelance work for five different licencees, it's only recently that I've tried my hand at adventures - first with Sanguine Solstice, then with Bone of Contention. So this is the first time I've had an adventure published.

Dark Queen's Gambit uses a similar approach to my earlier adventures (i.e., the adventure is split into scenes, each highlighting a different game mechanic). It obviously doesn't have the same puns and goblin humor as Sanguine Solstice and Bone of Contention, but if you liked the organizational style of my earlier adventures and you're a fan of Accursed, you should enjoy Dark Queen's Gambit!

The name of the adventure is a combination of "Dark Queen" (one of the witches of the Grand Coven) and "Queen's Gambit" (a classic chess move), and the plot draws inspiration from chess, the movie "Aliens", British folklore, and Greek mythology, although I won't say any more as I want to avoid spoilers. The story takes place in the Outlands, a region covered by Sean Bircher's new source book, which was one of the stretch goals from the recent Accursed: World of Morden Kickstarter.

Posted by Richard Woolcock at 07:44