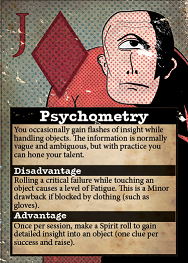 In the latest episode of the Wild Die podcast (starting at 5:30), Eric Lamoureux discussed Just Insert Imagination's upcoming Mutation Deck. This is actually my latest freelance project, and I'm now allowed to talk about it, so I thought I'd give an overview of what it is and how it works.

The Mutation Deck is a 56-card playing deck, consisting of thirteen ranks of each of the four suits, along with four Jokers. It can be used as a thematic action deck - and if you're one of those people who likes to play with four Jokers, this means you won't need to buy a second deck just to get those extra Jokers.

However the main purpose of the deck is to generate random mutations, and although there are various ways to do this, the standard approach is to split the cards into four decks (organized by suits with one Joker per deck), and allow each player to draw three cards during character creation, with the option of taking up to two cards as Minor Hindrances, and up to one card as their Major Hindrance. Of course these are optional, so players are never forced to have a mutation they don't like, and they're balanced against regular Hindrances, so the player won't be "nerfed" if they don't want to use them. 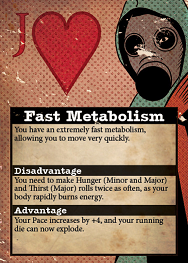 Each of the four suits represents a different type of mutation (Bestial Transformations, Elemental Gifts, Physical Anomalies, and Psychic Talents), and the four Jokers also have suits, so this gives players control over the type of mutations they receive. The GM can also let players exchange Mutation cards (much like they can Adventure Cards), which is a great way to get everyone working together during character creation.

In addition to the Mutant Hindrance, there are also six new Edges: Mutation Mastery allows the player to gain the listed Advantage for one of their mutations, while Elemental Focus, Physical Endowment, Psychically Gifted and Shapeshifter each boost one of the four types of mutation, and Mutant Surge is a more generalized mutant ability.

The mutations were originally intended for a post-apocalyptic setting, but could just as easily be used for a low-powered modern-day supers game, or designing fantasy or sci-fi alien races, or even representing Warhammer-style chaos mutatations. One of the optional rules also covers a "Mutation Trapping" that can be applied to powers, which is a great option for evil spells in horror or dark fantasy campaigns.

Overall it's a very versatile deck with a lot of uses, it was fun to work on, and I think people are going to like it!

Posted by Richard Woolcock at 01:42