Saga of the Goblin Horde: Evolution of a Setting 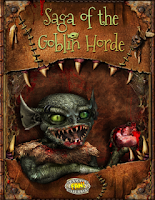 Six months ago I gave an overview of my progress on the Saga of the Goblin Horde setting. A lot has happened over the last six months, and the project had to be delayed while I worked on a side project, but the setting is progressing well and I thought it would be interesting to take a look at what has changed and what still needs to be done.

Although the overall structure of the book is much the same (and still divided into nine chapters), I found that I needed to revisit and overhaul sections that I'd previously considered complete, because the setting concept had evolved as I incorporated new ideas and expanded or reconsidered old ones.

The original goal for the introduction chapter was 1500-4000 words. Six months ago I considered this section complete at 1619 words (3 pages), but I've since expanded it to 2726 words (6 pages). It's still quite short, but I feel it now gives a much better overview of the setting, and it includes artwork for each of the different major factions. The result is a chapter that feels more polished and fleshed-out, without getting waffly.

However I came up with many new ideas while working on the setting, and I no longer feel the need to constrain myself quite so much to the original guidelines - game mechanics are my strong suit, so I might as well play to my strengths. This section has been expanded to 7275 words (13 pages), with 15 archetypes, 5 races, 20 Hindrances and 41 Edges.

I also stripped out the references to the Fantasy Companion, as I felt I could no longer justify the added entry barrier.

The original goal was 1000-4000 words, and six months ago I had 1607 words (2 pages), but the chapter was still incomplete. This section has since been been increased to 1978 words (5 pages), and includes the equipment table, as well as a lot more artwork.

I decided to drop the knick-knack table though, as I'd like to include it in the Campaign Deck.

My original expectation was 1000-1500 words (3 pages), however I eventually settled on 856 words (2 pages), as I decided not to bother adding any new powers or Arcane Backgrounds. Instead, this section just gives a short overview of the goblin deities, and lists which powers are available to their priests.

Six months ago I had reached 1350 words (3 pages) and was aiming for 2000-2500 words (5 pages). The final gazetteer is 2157 words (7 pages) including the map, and contains a lot of artwork. It provides a brief overview of each of the locations on the map, and I'm pleased with the way it turned out.

This was previously 1076 words (2 pages), but has now been expanded to 1441 words, and is still under work. The setting has gained a lot more depth over the last six months, and this chapter has been expanded accordingly, although I've tried to keep the information short and concise. I imagine it'll probably end up at around 4 pages.

Originally I had a very brief outline of the Plot Point Campaign and an adventure generator, and expected the final chapter to be around 30-50 pages (including Savage Tales). But I changed my plans rather dramatically. There is now a 306 word introduction and overview of the campaign, followed by a 613 Plot Point Summary that describes each of the 10 Plot Point Episodes, along with full write-ups for the first two adventures (1926 words total, although they still require polishing).

I still need to describe how to use the War Clock (the mechanism that drives the Plot Point Campaign in Saga of the Goblin Horde), and do full write-ups for the remaining eight Plot Point Episodes, but I'm no longer planning to include any Savage Tales.

However I've come up with a lot more monster ideas over the last six months, and also wanted to provide more details about the other goblin tribes. The bestiary is now 10206 words (25 pages), and there are 7 more pages currently planned. Many of the bestiary entry descriptions can also be used as seeds for adventure ideas.

It's definitely been a learning experience, and creating an entire setting has proved to be very different to creating a splat - there's a lot more to consider, particularly when the setting isn't fully fleshed-out in advance. But it's also a very rewarding experience when you see all the pieces starting to come together.

Posted by Richard Woolcock at 04:51