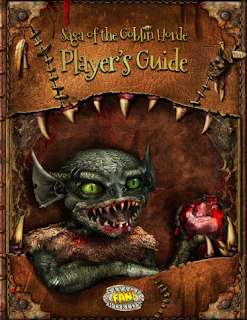 On Sunday I was invited onto the Wild Die Podcast, where I discussed Saga of the Goblin Horde along with my other fan creations. I also decided to release the Saga of the Goblin Horde Player's Guide at the same time - the full setting still requires additional work, but the player's guide is finished, so there's no real reason why I shouldn't release it earlier so that other people can already start testing it and giving feedback.

The SotGH Player's Guide is 36 pages (excluding the cover and credits) and includes six chapters: an introduction to the setting, character creation (including 5 races, 41 Edges and 20 Hindrances), equipment, setting rules (5 new ones), gods and magic (i.e., goblin deities), and the gazetteer (including a full page map).

Where do I get it?

You can check out the latest episode of the Wild Die Podcast (with a hilarious introduction song by Harrison Hunt) here.

The SotGH Player's Guide (along with the 15 archetypes and 6 One Sheets) are available from here.

If you'd like to join the Facebook group to ask questions, provide feedback, or simply talk about your own adventures in SotGH, it's available here.

The artwork for Saga of the Goblin Horde was funded through the freelance work I did for various Savage Worlds licensees, so I'd like to thank Obatron Productions, SPQR Games, Sneak Attack Press, Gun Metal Games, Melior Via, Just Insert Imagination, and The Mythic Gazetteer for giving me the opportunity to work on their products. It gave me valuable experience that I've applied to the creation of Saga of the Goblin Horde, and also provided the artwork budget I needed to bring my concept to life!

I'd also like to thank the many people who have given feedback and suggestions on the setting, as well as those who helped with the testing. Particular thanks go to Manuel Sambs, who created table tents, paper minis, status tokens and custom Bennies for the playtests.

There's quite a lot of artwork in the book, but I'd particularly like to thank the following artists, in order of help given, without whom the project would have looked very different:

Rick Hershey of (the aptly named) Fat Goblin Games. His great goblin artwork provided part of the initial inspiration for the setting, including some of the tribes and mutations. In fact most of the art I used in the book was created by Rick, and he also created the goblin princess for me as a private commission.

Lord Zsezse Works produce my favorite covers, and I really wanted a unique cover (not stock art), so I decided to commission one from them. Figu created the cover and interior pages, while Zoltán created the goblin portrait, and their fantastic work gave Saga of the Goblin Horde its trademark look.

Eli Kurtz of The Mythic Gazetteer created the awesome map of the goblin territory. But he didn't just create the map, he also gave me lots of insight and advise on the geography, helping me refine some of the terrain to make it more logical (such as the flow of rivers, the location of swamps, and so on).

Posted by Richard Woolcock at 01:25