Evolution of a Map

I was recently talking to a friend of mine, who is writing a fantasy novel, and we started chatting about maps. I explained that I'd used Inkarnate to create my initial sketch, but commissioned Eli Kurtz of The Mythic Gazetteer to produce the final map - partially because it wasn't clear what the terms of use were for Inkarnate, but also because I felt the results didn't quite capture the look I was hoping to achieve.

While hunting around for some examples to show my friend, I came across my early sketches, and I thought it would be interesting to show the different stages the map went through as it evolved from a rough initial sketch into a polished final product.

When I first started working on Saga of the Goblin Horde, I envisioned an area of land that extended into the ocean, with mountains and a great river to the north, and a forest to the south, with the main human lands to the east. Some of these ideas can also be seen in the early One Sheets, but when I tried to turn the concept into a map, it felt extremely barren. 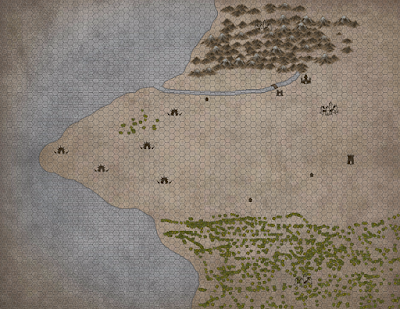 I started thinking up new terrain ideas while working on the setting fluff, and also divided the territory into the different regions controlled by the major tribes. This required carefully going over the One Sheets, making sure the geography fit with the earlier adventures. For example, Bone of Contention takes place in an old abbey which needed to be on the edge of the Redfang territory, but also needed to be close to the Bonedigger territory, so I decided to make them neighbouring tribes. 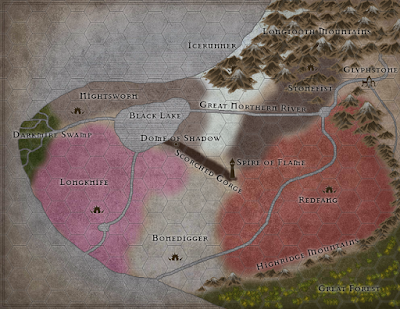 It was also at this point that Eli Kurtz started giving me advice on the geography, helping me to reshape the rivers, and expand the terrain to include swamps, plateaus, and more forests. 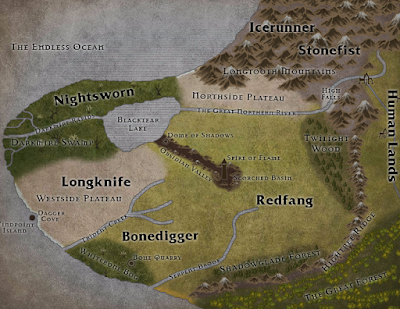 At this point I felt I had a pretty interesting region of world for the campaign to place, so I decided to commission a custom map. Eli already had a good idea of what I wanted, and I felt that his artistic style was a good fit for the book, so he started working on a new map. 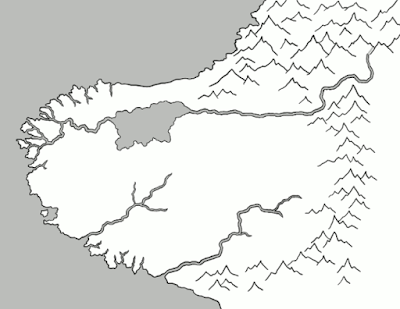 Eli then added detail to the swamps, forests and mountains, and changed the lake to turn it into more of a teardrop shape (to better fit with its description in the gazetteer). 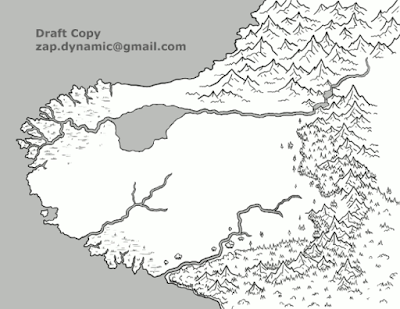 Eli continued fleshing out the terrain, finalizing the initial black and white version of the map. 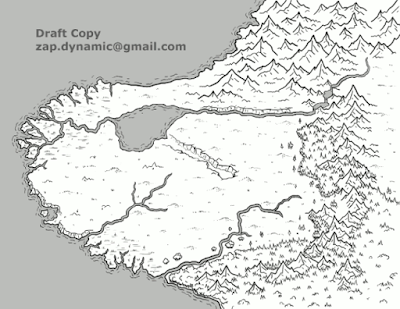 Next came the color, starting with the ocean and forests. This actually required quite a bit of discussion, and we looked at other maps to see what sort of colors looked good and contrasted well together. 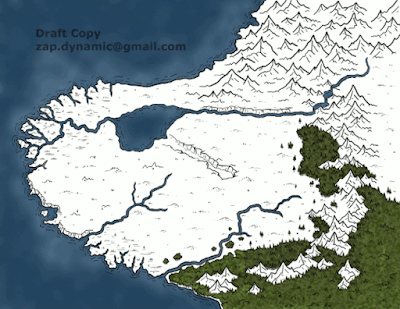 The rest of the map was then colored, using shades that contrasted well with the forest and ocean. 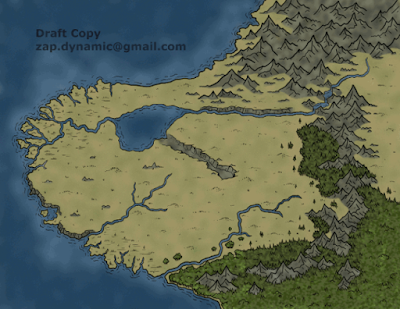 Finally, the swamps were darkened, while some highlighting and shadows were added to the mountains, and icons were added for the Dome of Shadows and Spire of Flame. The Obsidian Valley was also moved slightly so that it would better align with the hex grid I wanted to use. 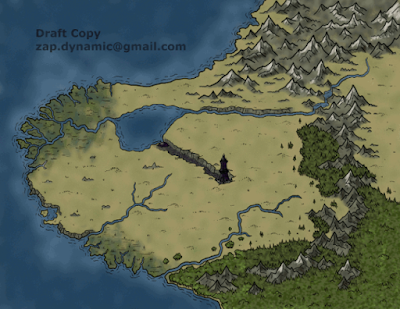 At this point we asked a few other people for feedback, and someone pointed out that map was too dark, so we tried experimenting with different levels of brightness and contrast. 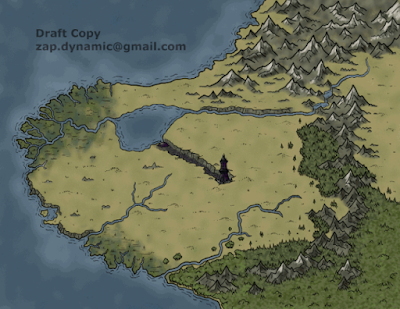 Some last adjustments were made to the colors, and Eli added some small tent and building icons, along with the compass and logo. 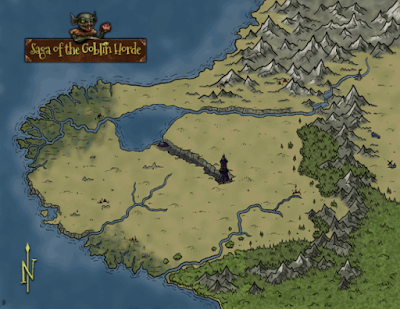 With the map itself complete, we then started discussing the labels for the different regions. I wanted to use the same font I'd used in the setting book, but it took quite a lot of experimentation to find a color that contrasted nicely with the background. 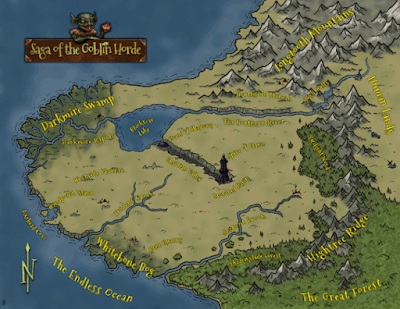 Of course I also wanted to include a hex grid, as the map had a functional purpose. Once again it took some effort to find a color that was easily visible against the background without overwhelming the map or labels (the usual black wouldn't work here, as the map itself was originally drawn in black, but brighter colors clashed with the text labels). In the end we settled on a semi-transparent white, with the hex grid drawn on a separate layer where it could be easily switched on and off. 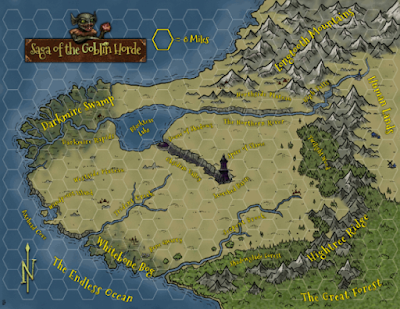 I also wanted to use the map to indicate the territory of the different tribes. This involved quite a lot of discussion, and in the end Eli came up with a very cool "fog of war" effect, which he placed on a separate layer. This allowed me to include a separate version of the map within the book, showing which region each tribe controlled. 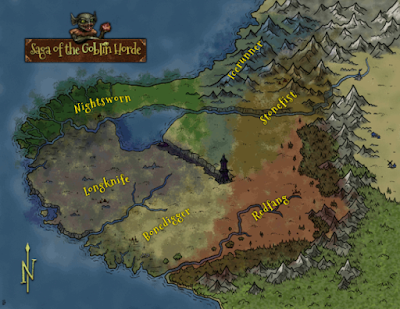 If you've not yet checked out the Saga of the Goblin Horde Player's Guide, you can grab it from here, and look at pages 9 and 38 to see how I ended up using Eli's map within the book. If you read through the gazetteer in the last chapter, you'll also see I made sure there was a section for each location marked on the map.

Posted by Richard Woolcock at 05:26