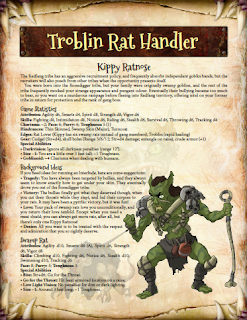 I released the first four archetypes for Saga of the Goblin Horde back in March last year, and promised I would release another archetype every month until I'd finished them all. That time has finally arrived.

I've previously covered the five races (bugbear, goblin, gremlin, half-human and hobgoblin) and four of the goblin mutant subraces (amphiblin, barghest, canitaur and psioblin), but now its time to look at the fifth and final mutant subrace, the troblin.

So allow me to present the fifteenth archetype: the troblin rat handler!

As always, the Savage Worlds version of the archetypes is available here, and the Swift d12 version here.

I released the first adventure for Saga of the Goblin Horde back in December 2015, so the fifteenth archetype also marks the fifteenth month I've been working on the setting. Of course I also worked on a lot of other projects in parallel, including freelancing for several licensees and polishing up several of my older fan supplements to practice my presentation and layout skills.

But fifteen months is still a long time, so I'm now planning to focus my efforts on bringing the project to completion. I may still release another goblin One Sheet or two, and will also need to finalize the Campaign Deck at some point, but I don't plan to work on any unrelated side projects until Saga of the Goblin Horde is finished.

This coming Sunday I will be on the Wild Die Podcast, talking about my work. If you're interested in Saga of the Goblin Horde, you should definitely check out the podcast, as I'll be making some announcements, and discussing things that aren't yet public. You can also email the Wild Die guys (thewilddie at gmail.com) if there are any specific questions you'd like to ask me.

Posted by Richard Woolcock at 02:17