Savage Worlds has a lot of interesting settings, far too many for me to ever reasonably play. Some people like playing one-shots, and those can certainly be fun, but they don't provide much time to explore the setting. That's one reason why I like slottable settings (such as Guild of Shadows or Drakonheim) - they can effectively be combined with other settings. Drop a slottable setting into an established fantasy world and you can explore both at once.

But there's also another option: crossover adventures. Even if two settings can't be merged, it might be feasible to link them, whether through a long journey, a magical portal, or something else. There's even an official adventure called "Shaintar Accursed: Darkest Tides" which explores this concept, serving as a crossover between the Accursed and Shaintar settings.

Where did those goblins go?

In January last year I decided to update my Savage Frost Giants fan supplement, which contains guidelines for an unofficial Witchbreed for the Accursed setting. One of the new things I added to the supplement was a small bestiary of banes, including a snow goblin, which included the following in its description: "Few snow goblins have been seen in Morden since the end of the war, leading to some speculation about where they might have gone." 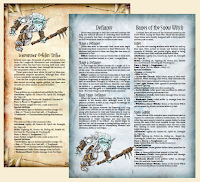 That wasn't a throwaway comment. I'd already started working on Saga of the Goblin Horde by that point, and I thought the snow goblins might serve as an interesting tie-in for a future (and obviously unofficial) crossover adventure. If the snow goblins escaped through a portal into the same world as Saga of the Goblin Horde, what else might come through the portal? Is the portal still open? Can other goblins travel back through?

Earlier this week I released the Saga of the Goblin Horde Player's Guide, which provides a short overview of each of the six major tribes. The description of the Icerunner tribe states that "This tribe first appeared only a few years ago, heading down from the peaks of the Longtooth Mountains to claim its place among the major tribes. Many of the tribe members sport a rather frosty appearance, which is assumed to be a recent mutation."

The Gods and Magic chapter also mentions that "Members of the Icerunner tribe worship a mysterious progenitor figure called the Snow Oracle, and claim they are not related to other goblinoids. Some among the tribe believe this Snow Oracle abandoned them, others that she freed them to seek out their own fate, or even that she is testing their faith. But whatever the truth, priests of the Snow Oracle possess no magical abilities."

The Snow Oracle is of course the Snow Witch mentioned in Savage Frost Giants, and while the connection might be a bit subtle, the implication for anyone reading between the lines is that the snow goblins fled Morden after the war, and found a new home among the tribes.

And of course this throws the door wide open for crossover adventures!

Here are a few adventure seeds based on the idea of a portal between Saga of the Goblin Horde and Accursed:

Foreign Food: A strange human came through the portal a few days ago, made his way down from the Longtooth Mountains, and met a sticky end at the hands of the Redfang tribe. A gang of goblins hauled the corpse home for the chieftain's lunch, and he enjoyed the exotic flavor so much that he's demanding more! Now the gangs will have to find out where the human came from, and see if they can stock up the chief's larder with tasty imported treats.

Strange Smells: A large band of stench goblins have found their way through the portal from Morden, and they have decided to claim some territory for themselves, but they don't seem to understand the customs or recognize the established borders of the tribes. And what is that strange smell?

Queen Quest: The Nightsworn tribe have learned of the portal after questioning an Icerunner gang boss, and heard tales of a "Dark Queen" who lives beyond. Could this be their Shadow Queen? They must know the truth! But they don't want to risk provoking the wrath of their divine mistress if they're wrong, so they've bribed the Redfang tribe to investigate.

Big Trouble: A large group of frost giants have come through the portal, and are now busily hunting down Icerunner goblins. The giants seem to be able to magically detect the presence of the Icerunners, which is making it very difficult for the goblins to fight back, so they've called in a favor from the Redfang tribe. Chief Bignose has sent some of his most vicious gangs to help cut these cheeky foes down to size.

A crossover adventure could also work the other way, with the GM introducing elements from Saga of the Goblin Horde into an Accursed campaign:

Return of the Snow Goblins: Most of the snow goblins mysteriously vanished at the end of the Bane War, but now they've started returning in large numbers, raiding human settlements with renewed vigor - and this time they've brought allies. The snow goblins are frequently accompanied by green-skinned goblins, beastfolk, and other strange creatures.

Dark Gateway: The heroes discover a magical portal leading to an unknown destination (possibly even as a follow-up to one of the scenarios described in Dark Queen's Gambit). Should they enter the portal, they will find themselves in a strange new land, populated by all manner of dangerous and exotic creatures!

The Lost Protégé: The Bonedigger tribe learned the art of necromancy from the swamp hags, a coven of powerful hobgoblin witches living in Whitebone Bog. But what if the first swamp hag was the protégé of the Morrigan, sent to explore a strange new land centuries ago, before finding herself trapped? If she still lives, and learns of the portal, the people of Morden could find themselves dealing with an invading army of goblins and undead.

While Accursed and Saga of the Goblin Horde obviously have a very different tone, they are both ostensibly dark fantasy settings with non-human PCs, and could work quite well together for crossover adventures. Saga of the Goblin Horde is designed as a mini setting, and is intentionally quite light on fluff, but a GM wanting to run a goblin-centric game in a richer and more detailed world could easily run an entire campaign set partially (or even fully) in Morden.

Posted by Richard Woolcock at 01:56