Saga of the Goblin Horde: 4 Archetypes 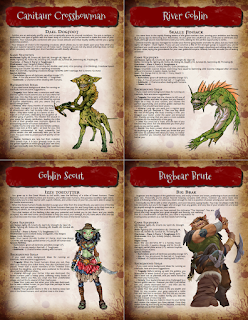 Back in December I released my first One Sheet adventure, called Sanguine Solstice. At the time, I said I was planning to release some archetypes for it, but those plans became increasingly extravagant - when I finally released Bone of Contention in February, I still hadn't finished the archetypes.

So I've decided to revise my plans, and instead of waiting to release all the archetypes in one go, I'm going to spread them out. My goal is now to update the document with one additional archetype every month, until I have finished them all.

The first version of the document contains four archetypes, and you can download it from here:

Saga of the Goblin Horde: Archetypes

The initial four archetypes are canitaur crossbowman, river goblin, goblin scout, and bugbear brute, and their background descriptions also provide some insight into the setting.

I've converted several different settings to Savage Worlds, but haven't yet released any of my own. I'd like to change that, and I think Saga of the Goblin Horde could make a fun mini setting.

The setting is primarily fantasy, with elements of horror and a streak of dark humor (think of the movie "Gremlins" for a rough idea of the sort of feel I'm aiming for). The campaign will focus on a relatively small geographical area, and can be played either as its own setting, or slotted into an established fantasy game world. The story follows the war between the civilized races (humans, elves, dwarves, etc) and the goblin tribes, with everything described from the goblin perspective.

As with the One Sheets, the players take on the role of goblin gang leaders, which means each player controls their own gang rather than just a single character. The Plot Point Campaign will include some adventures triggered by location and others by date, using a simple hexcrawl system for travel and a rough calendar for tracking the days.

Posted by Richard Woolcock at 03:23