Saga of the Goblin Horde: Plans for 2018

Last year I successfully published the Savage Worlds version of Saga of the Goblin Horde, and even created some print-ready PDFs for those who wanted a physical book. However I still have many more plans for the setting, and some new goals for 2018, so I thought I'd give a rundown of what I'd like to achieve. 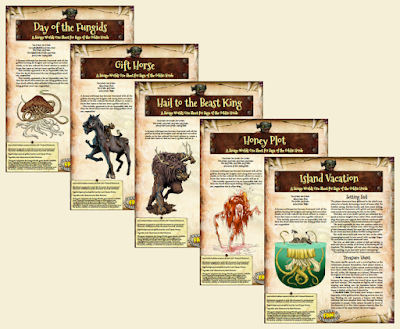 I've already written 11 One Sheets for Saga of the Goblin Horde, but I'd like to publish some more, at least one every couple of months. Here are some of the adventures I'm thinking of releasing this year:

Day of the Fungids: When I was younger I watched a TV show called "The Day of the Triffids". Based on an earlier novel, it was a bit like a zombie apocalypse, except with mobile carnivorous plants called "Triffids". In fact the main reason I added fungids to Saga of the Goblin Horde (and why I called them fungids) is that I wanted to create a parody adventure inspired by the Day of the Triffids!

Gift Horse: Inspired by a piece of stock art (a mutant horse). A mysterious admirer gives Chief Bignose a gift, a strange horse-like mount named "Trojan". And of course the chieftain accepts the gift without question, because that's the sort of thing Chief Bignose does.

Hail to the Beast King: In the setting book, I mention that "Former members of the Treebiter tribe also speak of a beastfolk king, who apparently lives deep in the Great Forest, where he rules over all manner of exotic breeds." That's not a throwaway comment, it was foreshadowing for an adventure I planned to write.

Honey Plot: Inspired by a piece of stock art (a man with a beehive humpback). Bugbears love honey almost as much as regular bears do, and a crazy druid beekeeper has decided to use his unnatural talents to set traps for them. This adventure will give me the opportunity to expand the lore on bugbears, as they don't get much coverage in the main book.

Island Vacation: The gazetteer in the setting book mentions that a "mysterious little island has also been spotted several times in different locations near the coast, appearing then disappearing from one day to the next." This refers to an adventure I'd originally planned to include in the main setting book, but which I will instead release as a One Sheet.

A few weeks ago, +David Garrett asked if there was a deck of cards available for Saga of the Goblin Horde. I'd originally planned to create a Campaign Deck, but later scrapped the idea. However I did quite fancy having a custom deck, and there was apparently some demand, so I started brainstorming - I wanted the cards to offer something special (beyond simply being a deck of playing cards), but unlike my work on the Mutation Deck, I couldn't explicitly reference Savage Worlds, so I had to get creative.

I've now come up with a design, and hope to finish and publish the deck in the near future. Technically it won't be a Savage Worlds product, but I imagine that's what most people will use it for.

Although I will continue to support the Savage Worlds version of Saga of the Goblin Horde with the release of new One Sheets, most of my efforts moving forward will be focused on my new system, Swift d12.

The Quick Start rules are now up to version 14, but I'm still playtesting and tweaking them. I have notes and feedback that I still need to incorporate, such as revised stunt rules, the magic system, and so on, and I still need to add some better examples of playing the game. But overall, the core mechanics are fairly complete.

Once I'm happy with the Quick Start, I'll start converting the full setting over from the Savage Worlds version. I'm hoping this won't take too long, but it will still involve quite a lot of work. Probably a few months.

Although I will obviously convert the One Sheets, I also have plans for a few larger adventures, including Chronicles of the Goblin Princess, and Tales of the Technolich. These will only be available for Swift d12 (as I hope to sell them), but I'll offer conversion guides for anyone wishing to run them with Savage Worlds.

After I've published Saga of the Goblin Horde, I plan to release a generic Swift d12 roleplaying system, with an open license for other publishers. This will also incorporate the expanded rules I've been working on, such as vehicles, firearms, etc, but hopefully the full rulebook should only be about a dozen pages (it's designed to be a pretty streamlined system). I hope to release this by the end of the year, and it will provide the foundation for my projects in 2019.

I've never been to a gaming convention before, but I hope to attend one or two this year!

Christopher Landauer asked me if I'd be interested in attending Genghiscon 41, and I was certainly tempted, but it would be a very long trip, and I had a lot of other things going on at the same time (such as moving home). Fortunately David Garrett has stepped up to represent Saga of the Goblin Horde, and he will be running two games this year!

Gio Dal Farra has invited me to Modena Play in April, and it's not too far to travel, so I'm planning to visit! This will be my first ever gaming convention, and I don't speak Italian, so I hope they go easy on me ;)

Some friends of mine attended ShaCon last year, and they had a blast. I couldn't make it due to other commitments, but I'm hoping they'll run another one this year (I just hope it doesn't clash with my friend's 40th Birthday party, because I already promised him I'd join him at a zombie shopping mall!).

Posted by Richard Woolcock at 02:07