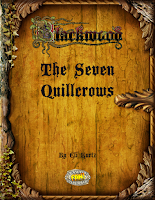 Eli Kurtz of The Mythic Gazetteer has been discussing his Blackwood setting for a while, and has also posted many of his playtest sessions on YouTube. But now he's released a free One Sheet adventure and a set of archetypes, which means other GMs can start getting in on the action as well!

Get the One Sheet here: The Seven Quillcrows.

And the archetypes here: Blackwood Archetypes.

You can also read more about it on their blog.

I've already had the chance to take an early look through the setting book (I even contributed some additional Edges and Hindrances to the document), and it's got a lot of great content.

If the Brothers Grimm had written a Savage Worlds fantasy setting instead of a series of fairy tales, I imagine it would have looked a bit like Blackwood. In fact, many of the adventures seem to draw direct inspiration from folk tales, although they tend to be inspired more by the original (darker) stories than the modern versions, and they're all linked together into a single cohesive world. It's cleverly done, and the setting is definitely worth keeping an eye on.

Check out the free stuff, I'm pretty sure there will be more to come!

Posted by Richard Woolcock at 07:31