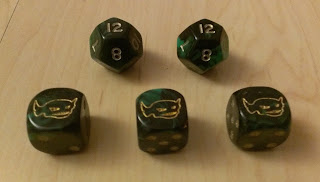 Back in 2013 I described an alternative dice system for Savage Worlds, based on the d10. Although I felt it would work quite well, it was only really intended as a thought experiment, because the multiple die step solution is a signature feature of Savage Worlds. However when it came to designing my own system, I actively wanted to avoid duplicating Savage Worlds mechanics, so I decided it was time to give my d10 approach some serious consideration.

While the d10 solution is certainly viable, I'm not a big fan of the die shape, and there are already several popular systems that use the d10 in a rather specific way. I find the d12 more pleasant to roll, and the additional sides also give a larger range of values. The d20 would also work well, but it comes with its own set of assumptions (about game mechanics) that I'd rather avoid.

Although I wanted the mechanics to work differently to Savage Worlds, I did want to keep the probabilities of the core dice system reasonably similar, so that I could easily convert my adventures, as well as reuse the knowledge, tools and fan supplements I've built up over the last few years.

The Savage Worlds traits d4-d12 become Swift d12 abilities in the range -1 to +3, so that an average character in Savage Worlds with d6 across the board would have +0 in everything in Swift d12.

Is roughly the equivalent of a Swift d12 Champion:

While a Savage Worlds Extra:

Is roughly the equivalent of a Swift d12 Minion:

And of course, the odd glitch in the probability curve no longer exists, as Swift d12 doesn't use exploding dice for ability checks.

Another benefit is that I can still use my custom d6 goblin dice :)

While the Swift d12 solution does require adding an additional modifier to the roll, during playtesting I found it saves time hunting around for the right dice (or worse still, accidentally rolling the wrong dice, and then discussing whether or not you should reroll), so it's still nice and fast to use. The system only uses two types of dice, and it's pretty easy to remember that you use d12 for ability checks and d6 for damage rolls.

Posted by Richard Woolcock at 03:03