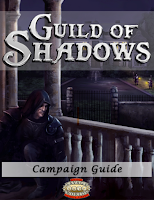 Guild of Shadows was released back in November, but now it's become available in print as well - and it's currently on sale, so if you're interested running in a campaign where the players are a gang of thieves, spies and assassins, you should definitely take a look.

Get it here: Guild of Shadows

In addition, the Rogues Hall of Fame (which contains 27 famous rogues from history and mythology, built as pregens using Guild of Shadows) is now available as Pay What You Want, so why not grab a copy for free, and if you like it you can go back and toss in a dollar or two, or perhaps write a short review?

Get it here: Rogues Hall of Fame

The original Rogues Hall of Fame contained 30 rogues, but 3 were left out as they were considered more "villain" than "rogue", so I turned them into an unofficial final page.

Get it here: Rogues Hall of Fame - Lost Villains

Although I'd previously submitted articles for Savage Insider, Guild of Shadows was the first official licencee setting for which I did major freelance work - I wrote a lot of the mechanics and edited the rest; I also wrote the Rogues Hall of Fame, and did the layout myself. So while Savage Insider got my foot in the door, I consider my work for SPQR Games to be my first major foray into freelancing for Savage Worlds.

Posted by Richard Woolcock at 05:27