The Guild of Shadows setting has finally been released to Kickstarter backers, and is now also available on DriveThruRPG. In a blog post earlier this year I mentioned that I'd edited and expanded the mechanics, but I've done further work since then, and in thanks for my contributions I've been credited as a co-author.

The final product contains 11 new Hindrances and 20 new Edges, as well as additional gear, and rules for disguises, minions, and poison. The disguise rules were based on a concept I originally proposed in an earlier blog post, the minion rules allow players to create and customise their own gang members, and the detailed poison rules allow players to design their own poisons by selecting different forms of delivery, onset time, and effect. There's also a simple adventure generator.

Guild of Shadows is set in the city of Kurstwahl, which can be used as a standalone setting, or slotted into an established fantasy setting. But even if you don't want to use Kurstwahl, the book could easily be used as a sort of "Rogues Companion" for people wanting to play thieves or assassins.

The adventures also do a good job of capturing the feel of the genre, tending to detail locations rather than events. For example Kurstwahl’s Eleven describes a location where the players have to execute a heist, paying particular attention to the various defences in place, but it's left entirely up to the players how they complete their mission. 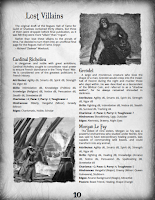 A side project I worked on was the Rogues Hall of Fame - it was a stretch goal that wasn't quite reached, but SPQR Games wanted to offer it to the backers anyway.

I was provided with a list of ten names for inclusion, but I had some additional ideas of my own, and also wanted to incorporate further suggestions from Kickstarter backers. In the end I wrote up stat blocks for thirty characters, although three of them (Cardinal Richelieu, Grendel, and Morgan Le Fay) were rejected due to being more "villain" than "rogue".

Rather than lose those three characters to the annals of time, I've turned them into an unofficial final page for the Rogues Hall of Fame, which you can download here.

The Riyria Revelations by Michael J. Sullivan is one of my favourite series of fantasy novels, so I thought it would be fun to stat up Royce Melborn using the new Edges and Hindrances from Guild of Shadows. I couldn't include him in the Hall of Fame for legal reasons, but I think I can probably get away with including him on my blog.

Royce grew up as a thief on the streets of Ratibor, eventually joining the Black Diamonds, where he became one of their top assassins. He was later betrayed and sent to Manzant Prison, receiving a brand on his left shoulder as a permanent reminder of his time there. After being rescued from the prison, Royce joined up with Hadrian Blackwater, forming the partnership called Riyria (meaning "two" in elven).

The following stats are for Royce as a Novice starting character, when he was still a youngster living on the streets:

Here's an older and much more experienced Royce, with 20 advances under his belt:

Posted by Richard Woolcock at 12:30