The King is Dead: VARGR 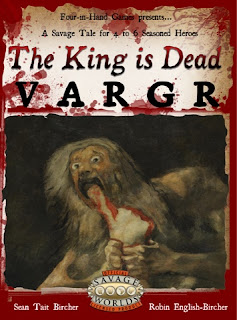 My first foray into freelancing for Savage Worlds licensees was Savage Archery, an article I wrote for Savage Insider volume 2 issue 2. One of the other articles in the publication was by returning author Sean Bircher, who had already written for the previous issue, and also ran the popular blog Wine and Savages. We both went on to write again for Savage Insider, and then started writing for other licencees.

Our paths converged again recently with Accursed, where Sean wrote the Outlands half of Bone and Barrow, while I wrote a One Sheet set in the Outlands. It was great to see how well he's done for himself, and compare the different things we've worked on since Savage Insider.

But like me, Sean also has plans for his own setting, and he and Robin English-Bircher have just released their first official licencee adventure for it!

The King is Dead: VARGR

Although this is advertised as an adventure, it's really more like a mini-setting. There's an overview of the history and geography of the region, a recap on recent events, and a breakdown of the various political factions (secret societies), as well as a handful of new abilities (one power, one Edge, and two Hindrances). There are also six archetypes (each offered as two versions: "standard" and "horrid secret").

The setting itself is a bit like a blend of French Revolution, Bram Stoker's Dracula, and Brotherhood of the Wolf, set in an alternate history with heavy gothic overtones and vampire aristocrats. The adventure part is split into three acts, each of which spans two pages, and I'm pleased to see it makes extensive use of Savage Worlds mechanics like Chases and Dramatic Tasks.

Overall this is a very cool product that offers us a taste of great things to come. Check it out!

Posted by Richard Woolcock at 05:05

Email ThisBlogThis!Share to TwitterShare to FacebookShare to Pinterest
Labels: Savage Worlds, The King is Dead: VARGR