Commission artwork: Describing what you want

Jiaxingseng recently wrote a blog post about his art development process, and included the description he gave to the artist. It's an interesting read, and somewhat different to the way I handled my goblin princess commission from Rick Hershey, so I thought I'd post my own description for comparison purposes:

The basic concept is a fairly classic swirling-dress Cinderella: http://www.thefeministwire.com/wp-content/uploads/2014/03/Cinderella.jpg

However she's a goblin instead of a human, and her slippers have pointed steel toecaps (this is important because one of the adventures is a spin on the classic Cinderella story; instead of leaving her slipper at the ball, she leaves it embedded in someone's head during a brawl).

She should have a golden ball in one hand, like that in the classic "Frog Prince" story: http://theblogofteresa.com/wp-content/uploads/2012/06/the-frog-prince-story-1.jpg

In her other hand, she should have some sort of oversized vicious-looking blade. My initial thought was something that looks similar to the "chopper" from your Assorted Items Vol 1 art pack, which would be resting across her shoulder a bit like this: http://wallpapers.boolsite.net/srv11/Images/Wallpapers/JeuxVideos/SoulCalibur/SC_ Siegfried_02.jpg

Her skin color should be roughly a similar sort of green to the goblins on my archetypes cover.

Eye color should be yellowish (yellow-green or yellow-orange is also fine, but not red, as I'm intentionally trying to distance my setting from the Pathfinder goblins, who are usually illustrated with red eyes).

My preferred dimensions would be roughly 5.5 to 6 inches high, and 4.5 to 5 inches wide. That's ideal for a full sized internal illustration, while a slightly reduced version will still be wide enough to look good on the cover.

Other accessories and embellishments would be at your discretion, the important thing is that she should look like a extremely dangerous goblin version of a fairy tale princess*, and have the steel toecaps and golden ball for the adventure tie-ins. I could envision her having a light blue dress splattered with blood, perhaps with a spiked collar and bracers, but I'll leave that up to you to decide, depending on what you think looks best.

* She isn't really a princess in the traditional sense though, she's a chieftain's daughter, so please don't add a crown.

Rick then provided me with a rough sketch to make sure he'd covered the basics: 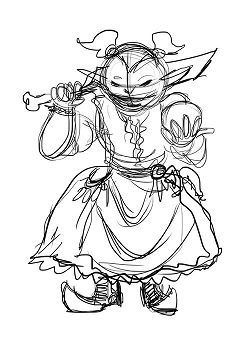 I replied with some further detail:

The sketch looks great, the only thing I would ask is that the sword be made longer (perhaps increase the blade length by 50%). The pitch for the first adventure is as follows:

The Princess and the Peabrain: What happens when a foolish ogre kidnaps a goblin princess from her tower, only to discover that she'd been locked in to protect others, rather than for her own safety?

I envision it as a sword she took from the ogre, so it would be far bigger than a typical goblin weapon - probably a similar length to a human sword, but much wider (just like in your sketch). The princess is monstrously (supernaturally) strong for a goblin, but still a fairly normal goblin height and build, so the sword would look particularly big in her hands.

The goblin scout in your goblin mega-pack has a distinctly female face and posture, despite being very obviously a goblin. If possible I'd like to capture a similar sort of quality, so she appears almost dainty, further emphasizing the massive sword.

And then just two days later, Rick sent me the finished illustration: 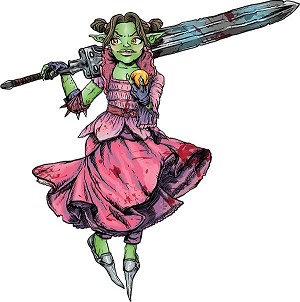 Chronicles of the Goblin Princess is still planned, but it was unavoidably delayed (I had to postpone it until I've published my Swift d12 system). I've already used the artwork in my Countdown Deck though!

Posted by Richard Woolcock at 04:38

Email ThisBlogThis!Share to TwitterShare to FacebookShare to Pinterest
Labels: Chronicles of the Goblin Princess, Saga of the Goblin Horde, Savage Worlds, SotGH