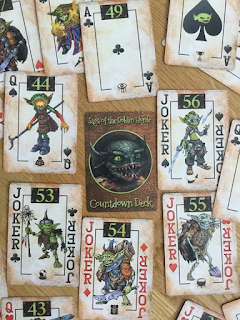 The Saga of the Goblin Horde Countdown Deck has been released! It is available on DriveThruRPG as both a free Virtual Tabletop asset and a printed deck.

As well as being a thematic Action Deck, the cards offer three additional features:

1. There are four jokers, and each has a suit. This makes the game even more crazy, and also makes it quicker and easier to resolve situations where multiple people draw a joker (you can use the suit instead of having to make an opposed Agility roll to determine who goes first). It's also handy for situational rules like Interludes, which reference card suits but don't actually define what a joker does, or the Kickball rules in SotGH, which were designed with the Mutation Deck in mind, and therefore take into account the possibility of jokers with suits.

2. Each card has a prominent "countdown number" at the top. You can use these to determine turn order as normal, from highest to lowest, without having to reference both a rank and a suit. The idea for this was based on observing how many people get confused over which suits act first when the ranks are a tie (even many experienced players will sometimes pause for a moment to work out whether hearts or diamonds go first).

3. Each card has a "saga symbol" at the bottom. These symbols are improvisational prompts; an "elephant" symbol could represent any sort of herd creature, or just something big, or it could be interpreted as strength, stamina, wisdom, memory, loyalty, etc. Likewise the "torch" symbol might represent fire, knowledge, destruction, heat, light, exploration, and so on.

The symbols can be used for all sorts of things - they can be used instead of (or in addition to) the suit for Interludes, or as inspiration for downtime activities, or to add additional flavor to the adventure generator (draw one card for each of the five scenes), or for fleshing out complications during a chase or dramatic task, and so on.

Here are a few quick examples of "boastful tales" based on drawing three cards, the highlighted words correspond to the saga symbols at the bottom of the cards (note that the specific order doesn't matter, the idea is just to take three symbols and turn them into a story):

One day you were fishing along the shore of Windpoint Island, and lost track of time. A storm was coming in, so you set off along the causeway. But before you could reach Axehead Cove, a massive sea monster rose up from the ocean, and attempted to devour you. Fortunately you managed to cast your fishing line at it, lodge your hook in its lip, and then surf back to shore!

Long ago, you took a fancy to a lovely maiden from the Stonefist tribe, after witnessing the vicious beating she dished out during a friendly game of Kickball. You headed into the Longtooth Mountains to woo her, but her brothers learned of your plan, and you had to fight them all single-handedly!

A mushroom farmer once gave you a swig from his hipflask, and the hallucinations drove you crazy! You sprinted deep into Twilight Wood, fleeing predators that only you could see, and ended up climbing to the very top of the tallest tree in the forest. When you finally regained your wits, it took you several hours to get back down to the ground! 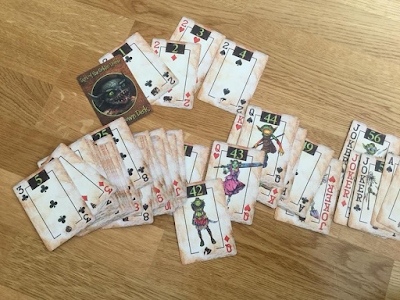 Posted by Richard Woolcock at 14:30