The chase rules in Savage Worlds are good at representing dogfights and mobile combat encounters, where two sides exchange attacks while running (or driving) neck-and-neck across the landscape. But sometimes a character is simply trying to escape, perhaps from overwhelming odds or an invincible foe, and the chase rules don't really work so well when only one side can attack, and the other just wants to escape. 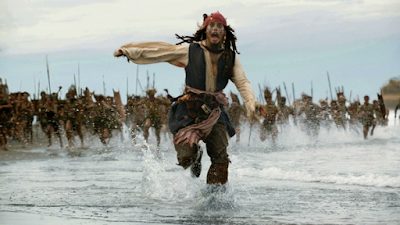 The Pursuit rules are designed for situations in which a character's goal is simply to escape their pursuers, either by outrunning them, or by ducking into a hiding spot without being seen. The idea is to give both the pursuers and the pursuee different tactical maneuvers, so that the scene is more than just a race to the finish line.

These mechanics are particularly well suited to urban environments, and would be an excellent fit for settings like Guild of Shadows, where the characters can frequently find themselves escaping combat and fleeing the authorities, or horror settings, where unlucky investigators might find themselves being pursued by unspeakable (and unbeatable) monstrosities.

Pursuits allow characters to take advantage of the scenery, clambering up trees, jumping between rooftops, ducking into alleyways, and so on. As always with abstract subsystems like this, narration is key. A combat encounter where people just say things like “I roll to attack, I hit for 10 damage!” will have no flavor or immersion, and the same is true for pursuits. It’s essential that the Game Master and players describe their actions, using the mechanics to support the narrative, not to replace it.

Each pursuit is divided into six range steps, which are marked on a Pursuit Chart: close, short, medium, long, extreme, and trailing. Pursuers can be represented on the chart with minis or tokens. Characters cannot make Fighting attacks unless they are at close range, while ranged attacks can be performed at close, short, medium or long range, with the appropriate range penalty applied to the attack. Weapons with exceptionally long range (such as rifles) or short range (such as throwing knives) should apply the penalty as if they were one range step closer or further away.

During combat, characters can initiate a pursuit on their turn by declaring their intent to escape.

The "escape" maneuver requires a successful Agility roll as a full-round action. If successful, the character flees combat, provoking free attacks as normal. Anyone wishing to pursue can simply declare that they are giving chase, and they are automatically moved to short range on the Pursuit Chart.

Each fleeing character should have their own Pursuit Chart. Characters can remain together if they wish, as long as they maintain the same pace, but this is only a narrative conceit; they are still tracked separately.

In the case of a vehicular chase, only the driver is tracked for the purposes of the pursuit.

Characters draw action cards at the beginning of each round in the same way as combat. Those with a higher action card may choose to act before or after those with lower cards; sometimes it's preferable to act later in the round, after you've had a chance to see what your opponent is doing.

Each character may perform one pursuit maneuver on their turn as a normal action. Other actions are also permitted, including attacks, tricks, tests of will, pushes, spellcasting, and so on, at the Game Master's discretion. Characters wishing to perform multiple actions suffer the usual multiaction penalty.

Explicit movement actions are not used during a pursuit, as it's assumed the characters are always moving. If a character doesn't perform any pursuit maneuvers, they are still pursuing or fleeing, but they don't make any progress relative to their opponent this round.

At the end of the round, anyone at trailing range automatically drops out of the pursuit.

The following three maneuvers are available to pursuers:

Pursue: Make a maneuvering trait roll to move one step closer on the Pursuit Chart. Should this put you at close range, you may also move into close combat, meaning your opponent will provoke a free attack if they continue running. When chasing someone with a higher Pace, you suffer a -1 penalty to your roll, or -2 if their Pace is twice yours or higher. If your Pace is higher than theirs, you gain a +1 bonus to your roll, or +2 if your Pace is at least twice theirs.

Drive: Make an opposed maneuvering trait roll against your target to drive them in a particular direction, perhaps by cutting off an avenue of escape while herding them toward other pursuers. This maneuver can only be used at close or short range, and if successful it allows every other pursuer at long, extreme or trailing range to immediately use the pursue maneuver as a free action (this is in addition to their own pursuit maneuvers, although character cannot make more than one free pursue maneuver each round). Apply the same bonuses and penalties as the pursue maneuver when driving someone who is faster or slower than you.

Lookout: Make a Climbing roll to clamber up a tree, onto a rooftop, etc. You move one step further away on the Pursuit Chart, but can shout directions to your allies, giving them +1 to their pursue maneuvers as long as you maintain your vantage point (this doesn’t stack with the bonus from other lookouts). At the Game Master’s discretion, it may be possible to continue the pursuit by jumping from roof to roof (or across the clifftops, or a narrow overhead ledge, etc, depending on terrain), however you suffer a -2 penalty to your pursue maneuvers while doing this. You can jump down again as a free action.

The following three maneuvers are available to the fleeing character:

Flee: Make a maneuvering trait roll to move everyone on your Pursuit Chart one step further away, or two steps if they have half your Pace or lower. Pursuers with twice your Pace or higher are not normally affected by this maneuver, unless you’re able to take a route they cannot directly follow (perhaps because they’re larger than you, or riding a mount). You may take a difficult path if you wish; this gives you a -2 penalty to your trait roll, but everyone chasing you also suffers a -2 penalty to their pursue maneuvers until the beginning of your next turn, unless they are using the lookout maneuver to pursue you.

Hide: You attempt to lose your pursuers by ducking into an alleyway or finding some other hiding spot. Make an opposed Stealth roll against your pursuers' Notice, those at long range receive a +2 bonus to their rolls, while those at medium range receive a +4 bonus. This maneuver cannot be used if you have any pursuers at close or short range. Any pursuers who succeed their Notice rolls are immediately moved to close range, but if none succeed then you escape. If you are fleeing multiple pursuers, those who succeeded their Notice rolls can shout a warning to the others, who are moved to medium range.

Backtrack: You wait until your pursuers get close, then rush past them in the opposite direction. Make a maneuvering trait roll, each pursuer makes an opposed roll against it: those who succeed receive a free attack at close range. If you manage to get away, all pursuers who won the opposed roll are moved to medium range, while those who failed are moved to long range. You can attack at close range while passing your pursuers if you wish, applying the usual multiaction penalty.

Note: These rules are based on a design I originally proposed here for Swift d12.
Posted by Richard Woolcock at 05:01