Savage Worlds is very good at handling large numbers of combatants without significantly slowing down, with heroes often facing hordes of foes, sometimes supported by allied Extras of their own. In fact some people even play the system as a skirmish-level wargame, using the Showdown rules.

Saga of the Goblin Horde was specifically designed to play to the strengths of Savage Worlds, so I decided to showcase the benefits of allied Extras by having the players take on the role of goblinoid bosses, each leading their own gang of goblin minions into battle.

While the goblin gang members make great meat shields and expendable cannon fodder, they tend to be relegated to a background role outside of combat, if not ignored outright. Some players will incorporate them into the descriptions of their actions - for example, Harrison Hunt recently discussed how one of his player ordered his minions to build him a shelter (listen to the hilarious story here, the shelter part is at 18:25), and in a previous game I ran, one player even rolled a die every so often to determine what his gang members were doing.

So I started wondering if I could add a simple setting rule, to give the players more incentives to incorporate their gang members into the story... 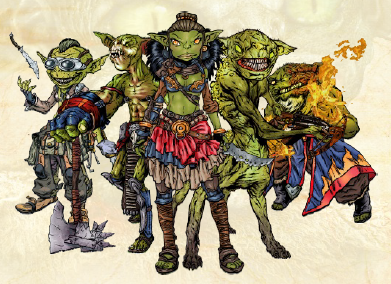 Goblins are a crazy and undisciplined lot, and gangs often get up to all manner of mischief and mayhem while their boss's back is turned. At the beginning of each scene, players with fewer than three Bennies and at least one surviving gang member have the option of invoking shenanigans.

The player draws a card to determine what one of their gang members has been up to, and earns a Benny for describing and embellish the flunky's actions and/or fate. The suit of the card can also be used for inspiration in the tale: Clubs often involves excessive violence, Diamonds might indicate that the gang member was driven by greed for riches, Hearts typically represents lust or desire, and Spades usually involves the search for something.

2: Found and ate something utterly disgusting. The gang member must make a Vigor roll to survive!
3: Beaten to death by another goblin while your back was turned. Nobody owns up to it.
4: Got into a fight or pulled a stupid prank, and have been knocked out for the scene.
5: Drank some fermented mushroom juice, and passed out for the scene.
6: Busy tormenting a small animal while the rest of the gang watch in glee. Your gang members all start the scene Shaken.
7: They become very rowdy; you and your gang suffer a -2 penalty to Stealth and Notice rolls this scene.
8: Disappeared for some private time, they will be back next scene.
9: Disappeared and won't be back, either they're dead or they deserted.
10: Decided it's time that they became boss; they Wild Attack you with the Drop, then fight to the death.
Jack: Performed an act of utter stupidity that resulted in a very painful and embarrassing death.
Queen: Accidentally stabbed you with their spear; you suffer 2d6 damage.
King: Did something unspeakably revolting. You and your gang must all make Spirit rolls or start the scene Shaken.
Ace: Tripped or pushed you at the worst possible moment; you suffer a level of Fatigue from Bumps and Bruises.
Joker: Scavenged or stole a knick-knack from somewhere. You can take it off them by force, and keep it for yourself!

Posted by Richard Woolcock at 02:01