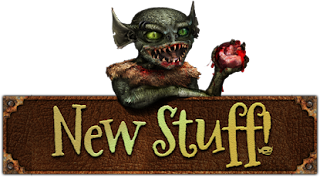 I've got a load of new stuff coming up for Saga of the Goblin Horde over the next few weeks, so I thought I'd give an overview for those following the development of the setting.

My fourth goblin One Sheet is finished, and I'm planning to release it a couple of weeks before Halloween. Frank Turfler (of Middle Kingdoms Adventure & Trading Company) will also be releasing a set of free maps to go with the adventure! His final map will be released at the same time as the One Sheet.

You can read more about the free maps here. As usual, hi-res versions of the maps will also be available to his Patron supporters.

The majority of the artwork used in Saga of the Goblin Horde was created by Rick Hershey. Many other Savage Worlds products use his work as well, but I think it's a particularly good fit for my goblin setting (and not just because his company is called Fat Goblin Games!). 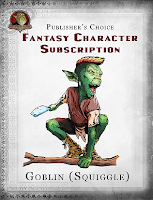 Rick recently started a new art subscription, this time for fantasy characters. Figure illustrations are pretty versatile pieces in general, useful for both covers and interior filler, but they're particularly good for archetypes - and better still, subscribers can post suggestions. I really like the other two subscriptions I've bought, so I decided to get this one too, and of course I posted a suggestion for a crazy goblin concept. You can imagine my delight when Rick added my suggestion a week later!

So as a result, I've decided I'm going to use Squiggle Mushroomhead for the October archetype: the goblin psychonaut (a tribute to an old friend of mine!). This will give me the opportunity to delve into some previously unexplored aspects of the setting, and reference a couple of new abilities from the main book.

After seeing the Squiggle artwork, I decided it was about time to commission a private piece as well, so I contacted Rick yesterday and he's already sent me a first sketch. The new illustration will be used for Chronicles of the Goblin Princess, a series of side adventures that can be treated as Savage Tales in the main campaign, or run as their own mini Plot Point Campaign.

One of the advantages of releasing Chronicles of the Goblin Princess as a separate PDF is that I can make it system-neutral if necessary. The same approach could be used for other adventures as well.

A few months ago I ran a session of Saga of the Goblin Horde for Manuel Sambs and his girlfriend. As Manuel was already familiar with my other One Sheets, I ran one of my unreleased adventures, Root of the Problem. The game worked out great and we all had fun, although it was shorter than I'd planned.

Next weekend I'm going to run another game. This time it'll be a larger group, and I've prepared two adventures that can be run back-to-back if necessary (Dungeon Squat and Pub Crawl, which are also the first two episodes of the PPC - both are humorous spins on the traditional dungeon crawl concept). Manuel has prepared some of his awesome table tents for the goblin archetypes, so hopefully we'll get some pictures to post after the game!

Inspired by Kristian Serrano's SBN Wild Dice, I decided to order some custom laser-engraved Wild Dice for Saga of the Goblin Horde. They're 16mm green Oblivion dice with a goblin head in place of the 6 spot, and I will post pictures as soon as I get them (although this may take a few weeks).

Posted by Richard Woolcock at 12:57