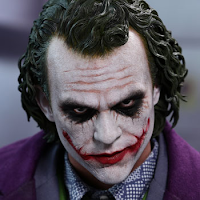 Something that I've seen crop up from time to time during games and discussions is the false assumption that Jokers always act first in combat. This assumption overlooks one of the biggest tactical advantages of the Joker:

If you're dealt a Joker for initiative, then you can act whenever you like, even interrupting other characters in the middle of their own actions!

Of course any card can be used to go on Hold in order to act later in the round, but if you become Shaken while on Hold you lose your action, and if you want to interrupt someone mid-action you have to beat them with an opposed Agility roll, which can often be a risky prospect.

By contrast, with a Joker you don't need to go on Hold, because you can act whenever you like - so there's no risk of losing your action from becoming Shaken. And if you wish to interrupt someone mid-action, you automatically succeed, unless they have a Joker as well!*

So while it's true that Jokers can go first, it's usually better to wait until your enemy tips their hand, as often you can ruin their declared action while taking your own. If you wait until an enemy starts charging towards you, for example, you can automatically interrupt them and step just beyond their reach, preventing them from taking their intended attack. Or if they decide to shoot you, you can interrupt them to take your own shot before moving behind heavy cover (or even flicking off the light switch if you're indoors), giving them an unexpected penalty to hit you.

Savage Worlds offers a range of interesting tactical options, and Jokers are one of my favorites. So the next time you're dealt a Joker in combat, don't just act first - act tactically!

* When two characters have been dealt a Joker, and each wishes to act before the other, some people like to house rule that one color of Joker acts before the other. If you're using the Mutation Deck (where each of the four Jokers has a different suit) you could even use the standard suit-based order of initiative. However the official stance is that the conflict should be resolved with an opposed Agility roll.

Posted by Richard Woolcock at 07:30